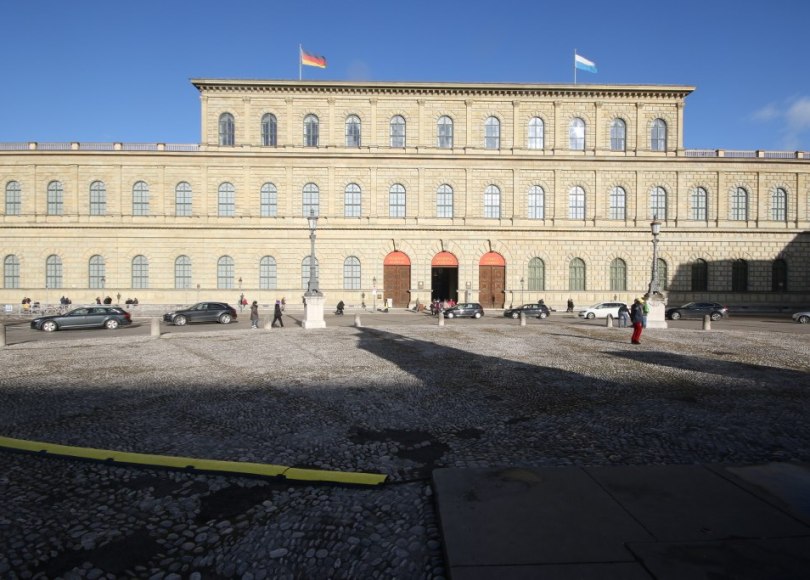 One of the main attractions of Munich is the former royal palace called the Recidenz. It is located right in the center of the city a short walk from the most famous square Marienplatz with easy access by the U-bahn or S-bahn system.

The old royal palace is pretty big taking up a couple of city blocks so it is a large palace to go and visit. There is no longer a royal family ruling in Bavaria so the old palace have lost its original function and has been transformed into a museum for the general public.

The building of the Recidenz started in 1385 but the building has been repeatedly rebuilt and increased in size over the years. Until the total complex grew into its current size with a total of ten courtyards and 130 large rooms. In addition to the palace museum there is also an old theater called the Cuvillier Theater which has been made into a separate museum and ten rooms has been dedicated to a treasury which can also be visited.

The complex of the Recidenz were severely damaged during the second world war – in fact only about 50 square meter of the roof were left standing after the war. Hence the castle needed a significant reconstruction after the war. Fortunately the West German authorities decided to spend a significant amount of money making the reconstruction possible.

If you like to walk around old royal castle the Recidenz is a most when going to Munich. Even though most of the palace is a modern reconstruction the rooms are still impressive to go and have a look at. And they have managed to get a decent amount of old furniture to furnish some of the rooms. Going through the castle you can pick up a free audio guide to help you understand what you are looking at in the different rooms.

I guess the most impressive part of the castle is actually in the beginning where we start in an old grotto courtyard which is some of the oldest part of the castle. It is built in old style with some strange looking ornament around a large fountain – which currently has no water running.

Next we go into a very large hall called the Antiquarium which is a very long room with many decorations inside the room and a lot of statues along the sides of the room. I find this is the most impressive of all the rooms of the museum.

We continue around the castle enjoying the impressive royal apartments and representative rooms. It takes quite a bit of time going through the museum while listening to some of the commentary – there is no way you will be able to listen to all the information’s since it will take days to go through.

After the visit to the museum it is possible to go and see the Cuvillies Theater and the Treasury. It is cheaper to go on a combined ticket. I will highly recommend the Treasury while I find the theater is a lesser attraction – but if you got the time it doesn’t cost much more. If you visit during December it is easy to combine the visit to the museums with a visit to the Christmas market at the Recidenz which takes place in one of the courtyards of the complex.