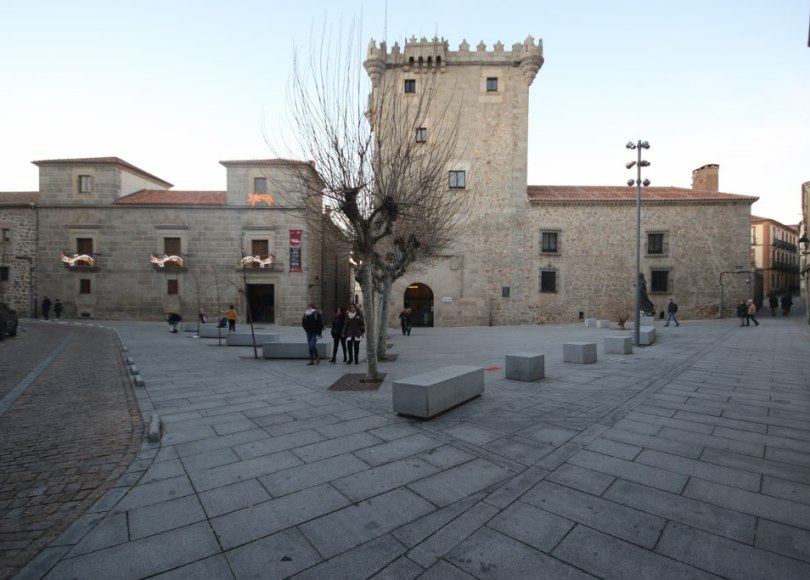 We arrive to Avila in the late afternoon after we visited Segovia in the morning. Fortunately the old town of both Avila and Segovia is fairly small areas so it is easy to get a first impression on the towns on a quick walk around them.

Our hotel is located a bit outside the old town of Avila – which makes parking a lot easier than it would be inside the famous walls of the old town. And since we arrive in the afternoon on a Saturday parking is actually free until Monday morning so we don’t have to worry about how to feed the parking meter.

Walking along the one of the main street of the city outside the old town take us by a couple of old churches – so even this area outside the walls is pretty old. There is an old church with a stork having a nest on top – I guess it is a bit early for the breeding season but the stork might have been able to get the prime stork real estate of the city.

We pass an old monastery on the way as well until we reach the square in front of the old town. At the square in front of the old town is another church and there is also an ice-skating ring on the square. The ice skating seems to attract quite a lot of locals enjoy the seasonal opportunity to get a bit of exercise – the weather isn’t cold enough for ice but I guess there is some cooling elements under the ice to make sure it can survive the nice temperatures in the teens during the afternoon.

The main attraction of city is right at this square where there is the main gate to the old town. The wall is pretty impressive here during the day and later at night there was actually a light show on the wall probably it was only a seasonal event since it looked pretty much like a Christmas show.

We head inside the walls of the city and decide not to go up on the walls this afternoon – instead we did this the next morning and it is a nice experience to walk the walls of Avila. From the gate we wonder around some of the old streets with many old buildings. The old town is a nice place to wonder and we get to a large square in the middle of the old town. The square is called Plaza del Mercado Chico – disproving my hypothesis of all the prettiest squares in Spain is called Plaza Mayor. There is a small Christmas market going on at the square so it is possible to go and have a little snack like a churro at the square – which was nice when we were a little peckish in the afternoon.

We continue the walk through the old town and get to another square with an old palacio which is also a free museum. It has been a nice quick exploration of the old town and it is getting dark soon so we go back to the hotel for a bit before dinner.

The next morning we head for the wall to walk on top of the wall. We have to exit at the bottom of the old town so we get an extra walk through the old town in the morning. After we are ready to leave Avila we drive around the old town to a little spot from where we can see the wall of the old town from a distance. The view here is pretty good – but it would have been better to come in the afternoon because of the position of the sun. I guess we should have gone yesterday but it is too late now.