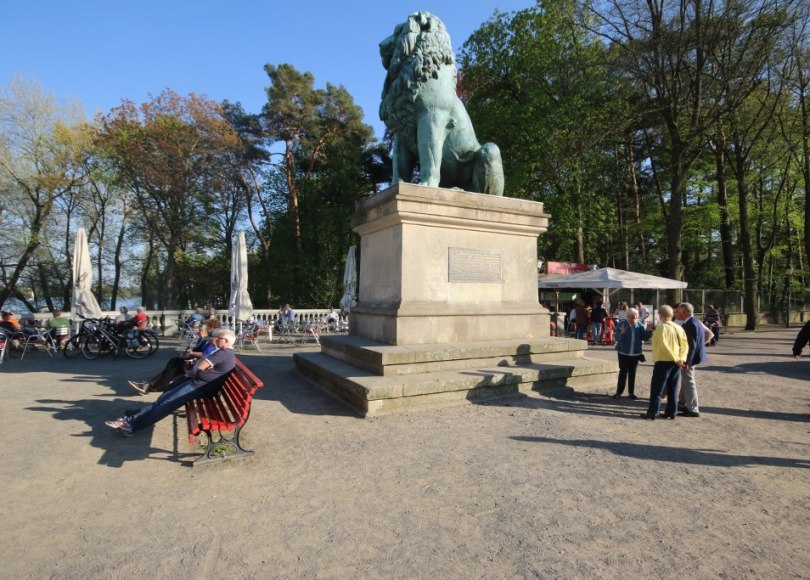 In Wannsee down at the water next to the Haus of the Wannsee Conference you find a big statue of a lion. The Germans call it the Flensburger Löve – but the original name of the lion is Isted Løven or the Lion of Isted. Isted was the location of the biggest battle ever in Scandinavia on 25 July 1850. The battle ended in a decisive Danish victory which led to the victory in the first Schleswig war.

The victory in the first Schleswig war was very significant for the Danish national feeling and secured for a while Schleswig was united to the rest of Denmark which had shared a common history and language for a millennium. Hence it was decided to make a monument to commemorate the battle. It was decided to put the monument of the lion not in Isted where the battle took place or in Copenhagen the capital of Denmark – instead it was placed in Flensborg which was the biggest city of Schleswig facing south in defiance to the German enemy who had supported the rebels of Schleswig-Holstein which tried to separate from Denmark. The location of the statue was seen as a provocation by the German minority in Schleswig.

The statue of a lion was decided because the national emblem of Denmark has three lions and the emblem of the duchy of Schleswig have two lions. So a lion was a common symbol for the two parts of the Danish national lands. Back in the mid-19th century not many people actually knew what a live lion looked like so to make a proper statue of a lion the artist went to Paris where he could study a live lion in the Jardin des Plantes. The artist made a life size model of a lion which he brought to Denmark to make the actual statue. The statue was finally finished in 1862 and was erected on the cemetery in Flensborg.

Unfortunately the second Schleswig war broke out in 1864 ending in a complete Danish defeat and the annexation of Schleswig and Holstein into the Prussian kingdom. The Prussian took the lion from Flensburg and placed it outside their capital in Wannsee facing the waters. The lion stood here until 1945. Then after the Second World War the lion was returned to Denmark and placed in Copenhagen. It remained in Copenhagen until 2011 when it was returned to the original location at the military cemetery in Flensborg which is now located just south of the current Danish border in Germany.

So if the original lion is in Flensburg how can there be a lion in Wannsee today? Well it is a copy dating back from 1874 it was moved to its current location in 1938 where it has remained until today except for a repair in 2005.