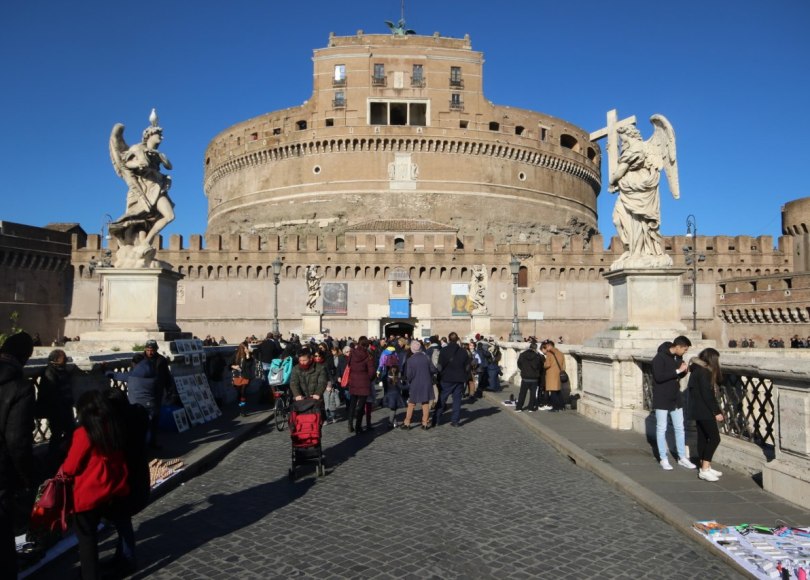 The castle is located in the center of Rome just at the end of the Saint Angelo Bridge across the Tiber River. I have seen this remarkable building every time I have been to Rome – but I have never actually gone inside to explore the building. So this time should be different. It was time to go inside and see what is actually inside the building.

The castle wasn’t actually built as a castle originally – instead it was built by Hadrian to be a mausoleum for him and his family. And when it was built it was towering above the Tiber as the tallest building in Rome at that time. After his death Hadrian’s ashes were placed in the center of the building in 139. His wife and adoptive son were also placed inside along with him. The building was apparently so impressive in ancient Rome it was also used as the final resting place of later emperors up until Caracalla in 217.

When Rome declined so did the old mausoleum in its function as the final resting place for the Roman emperors.  The building was gradually changed into a fortress and part of the wall of Rome. Finally in 410 the Visigoths sacked Rome and among the items they took away were decorations of the Hadrian Mausoleum and possibly the urns of the old Roman emperors.

According to legend the Archangel Michael showed himself on the top of the mausoleum and stopped the plague of 590. This is how the Castel Sant’Angelo got its current name.

The building was transformed into a major Papal castle in the 14th century and Pope Nicholas III connected the castle to the Church of Saint Peter by a fortified corridor. This corridor came into action a couple of centuries later when Pope Clement VII used it to get to the castle where he sought refuge during the sack of Rome in 1527.

Today the castle has been transformed into a museum and it attracts well over a million visitors every year making it one of the most popular attractions in Rome. When you go inside the castle you can walk around and see the round mausoleum from the inside while you are covered by the walls of which has been added to protect the popes castle. When you go inside the mausoleum you will actually pass a big hall inside which used to be the final resting place for the ashes of several Roman emperors – as mentioned you won’t see the urns today since they have been removed long ago.

You can walk around the walls of the castle as well looking at the bastion and while you make it ever higher you get an ever better view of the city of Rome. You will also have the chance to go in and see a couple of papal apartments in the castle which are stunning – there are no signs the pope lived a life in austerity serving the lord. After you visit the last of the apartments you got the chance to take a stair even higher to the top balcony from where you have a great view of large part of Rome including the Church of Saint Peter and large parts of the Vatican where the pope have their daily life when Rome isn’t under attack.

If you have already done the major attractions in Rome like the Foro Romanum, The Colosseum and the attractions in the Vatican this place should be pretty high on your list of the next place to visit.