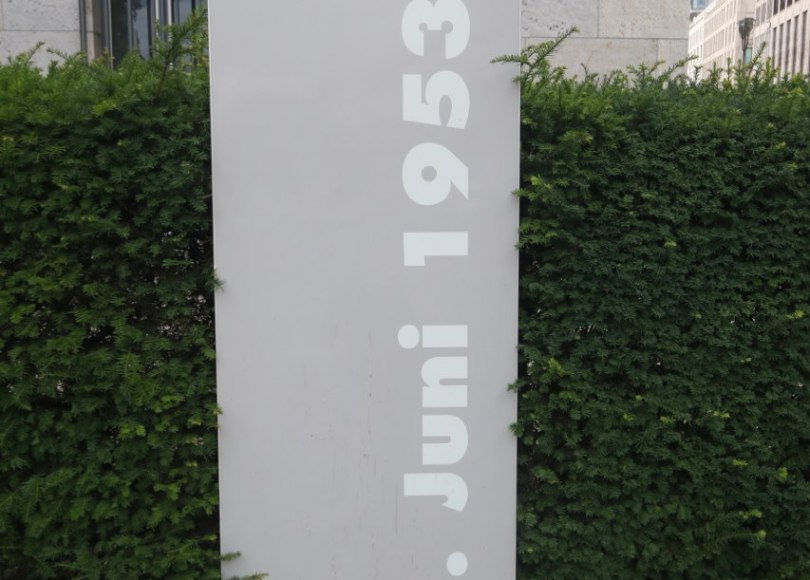 In the start of the 1950s the meeting between the different occupied regions of Germany started to be changed into a formal border of countries. The Soviet occupied sector was now formally controlled by the SED – the Socialist Unity Party of Germany. The communist government started to focus on the defense of the country against a possible attack from the much larger part of Germany which was controlled by the western allies.

The increased investment in the East German military put a heave strain on the resources of Eastern Germany which were still only partially rebuild after the end of World War II. The living standard of the people living in the eastern part of Germany was falling while the economy of the west started to improve. The fall in the living standard was followed by a tightening of the political oppression of the communist state.

After the death of Stalin in March 1953 the bad conditions in Eastern Germany meant a lot of people started to leave the east for a better life in the west. The new leadership in Moscow put pressure on the East German leadership to work harder to build up socialism. As part of this process it was decided to increase the production quota of the factories and building workers in Eastern Germany by 10 percent in June 1953. This in reality meant the wages of the people in East Germany would be decreased by 10 percent.

In the different factories and on the individual building sights the workers were starting to complain about the wage cut. They started to consider striking – which were in fact legal under the constitution of the communist sector of Germany. On the morning of 16th of June the buildings workers on several construction sites in East Berlin decided to go on strike against the falling wages.

In the afternoon a car with a loudspeaker came out announcing the increased production quotas were revoked and the demonstrators spread out to discuss the situation. There were still calls for a general strike the next day. On the morning of June 17th 36,000 workers in Eastern Germany went on strike and went to the House of Ministers to protest and demanding free elections, freeing the political prisoners and lower production quotas. This morning the Soviet military was prepared. They sealed off the East German sector with tanks and there were many dead’s and wounded amongst the demonstrators.

In the wake of the uprising there were demands by the Soviet of a reprisal of the rebels. 18 people were summarily executed included a West German worker who happened to be in the Soviet Sector of Berlin. Afterwards 1,500 people were prosecuted for their participation in the uprising and 2 were executed and 3 sentenced to life in prison. The East German government was shaken up by the uprising but they continued their policy of crushing all opposition to the communist leadership. The oppression didn’t stop until the fall of the Berlin Wall in 1989.

Today there is a memorial for the uprising in front of the old House of Ministers. The square has been renamed into the Platz of Volkaufstandes 1953 in memory of the old uprising. The memorial were obviously first made after the reunification of Germany.

During the communist rule of the country the square had gotten a mural to happy communist workers of East Germany who apparently was always happy with the communist party and the socialist way of life.