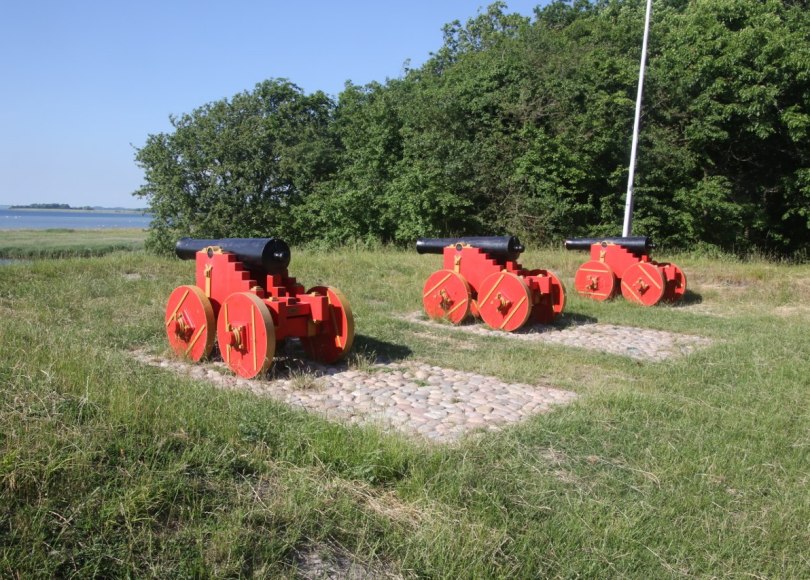 During the war against Britain Denmark had a huge disadvantage – the British had taken the Danish navy and controlled the Danish waters. This made transport and communication between Copenhagen and the rest of Denmark very difficult since Copenhagen is located on an island and contact to the other islands had to go through waters controlled by the British navy.

To help at least secure a little control of some of the Danish waters the king decided to build small gun boats which could be powered by rowers and attack smaller British ships if they were close to the coast particularly in times of no wind. A series of small forts were also built at strategic locations around the country. One of these locations is found at Stignæs.

Stignæs had an important location on the island of Zealand since it was close to the island of Agersø and later Omø. These small islands were located at the narrowest part of the Great Belt and the sail to the island of Langeland was fairly short. To help protect part of the water several fortifications were built here one on Stignæs, and one scone on Agersø and another on Omø. These fortifications could help protect the crossing of the Great Belt by the Danish postal boats and other boats who dared cross the waters despite the British navy.

The fortification was supplied with 4 large guns which would be a bit danger for any British ship approaching the coast at this location. The gun position might have been sufficient to keep the British away and the fortification actually never saw action during the war.

A century later the fortification was no longer in use but there was talk about building a new naval base at this location. It ended up being built a bit further north at the city of Korsør. The old fortification was forgotten and lost in the forest.

In 1936 locals with a historic interest decided to restore the old fortification and the first repair were done and a couple of old guns were placed at the fortification.