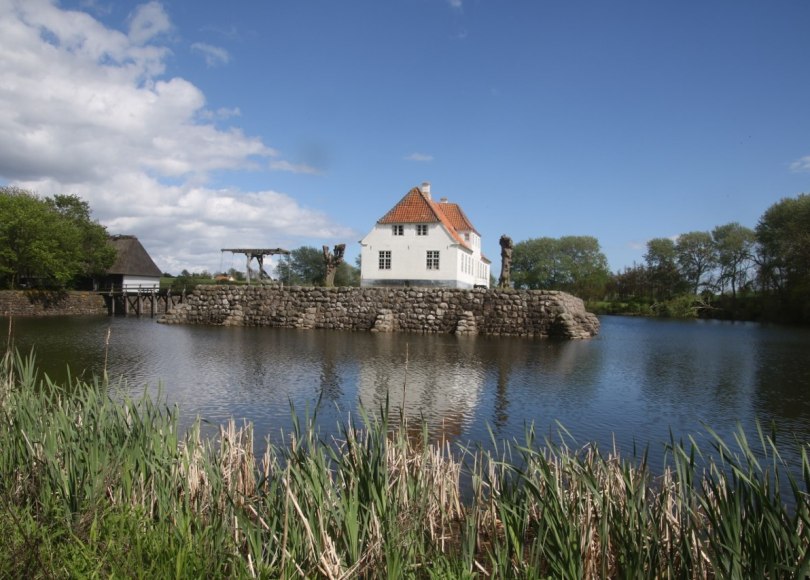 Ærø only has one building which can be called a castle. It is Søbygaard which is an old castle build on a little island inside a small lake where it would have a good defensive position in case of unrest. The castle was originally built by Hans den yngre (the younger) who was the son of King Christian III. As an in heritage from his father he got the title of Duke of Schleswig Holstein.

He built the castle in 1580 and it was supposed to be used for him as a base when he was going hunting on Ærø. Though he didn’t spend a lot of time on the castle and his off spring didn’t spend a lot of time here either. Finally the castle was sold of in 1772. The castle was owned by different owners for a couple of centuries until it was finally purchased by a trust in 1991 which is now running the castle as a museum. You can go and visit the castle during the summer season and see a bit of the history of the area. we didn’t go in since it was closed when we went by.

Next to the castle you find an interest place called Søby Volde. It is one of the best preserved fortifications from around 1100. Back then there was an important fortress at this location which should help protect the area against the frequent attacks by the pirates living along the shore of the Baltic sea at the area which is now northern Germany and Poland. The people called Venderne were frequently attacking the southern part of Denmark and the Danish kings did a lot to protect the kingdom against these pirate attacks.

The fortress was in use in about 150-175 years and then it was abandoned. The reason was the Danish kings had finally passified some of the raiders and for a while made this area a part of Denmark. with the Danish control of the area there was no longer the same need for fortifications to protect against pirates.