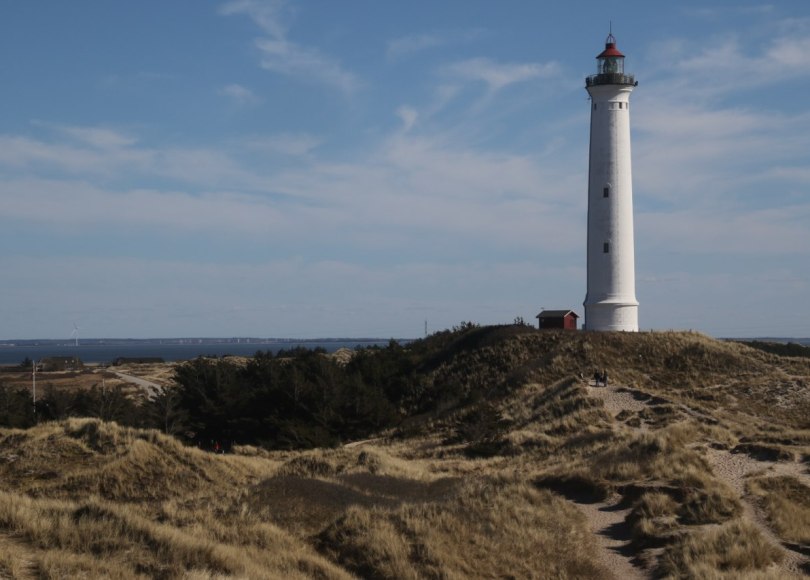 The west coast of Jutland is a long stretch of sandy beach without many notable landmarks. This has traditionally made it difficult to navigate along the coast. The trouble is enhanced by the fact there is many treacherous areas with shallow water where the ships could run on ground. Thousands of ships have been lost along the coast during the last few hundreds of years. Some places are more dangerous than others – and these places were some of the first where you built light houses.

The first lighthouses did help a lot but there was a lot of stretches of the coast which didn’t have any light house and during the night the ships ran the risk of drifting too close to the shapeless landscape. One of these dangerous places was at Lyngvig which was at the midpoint between Blåvand Huk lighthouse in the south and Bovbjerg lighthouse in the north. It left more than 100 kilometers without a lighthouse.

Not surprisingly this long dark stretch of land meant trouble for some ships. In 1903 a Norwegian freighter ran aground just outside Lyngvig and the Norwegian government contacted the Danish government asking for something to be done. After a while the decision was made a lighthouse should be constructed at Lyngvig. It only took a few years and in 1906 the lighthouse was ready to guide the ships along this area. The lighthouse was sending the light out at sea without interruption until 1940 when the German occupying forces ask for the light to be shut. Fortunately light reappeared in 1945 after the war.

If you are driving along the west coast of Jutland it is worth stopping by the lighthouse for a little break to see it and enjoy the views.

Late lunch at the hotel restaurant. Apparently you will need to order traditional polish food to enjoy and taste delicious. When order something westerners its just come out strange and taste awful. The potatoes pancake and goulash was defined, the pork with bacon and cream sauce was bad. It taste sour and the vegetables was really bland. The cheecake was better than the one we had in Gdansk but it still taste strange as it has flour on it not just cream cheese. Will definitely not eat here again
Hunting for the bison
Dinner at one of the square restaurants with fantastic view toward church.
We arrived just before 5pm at this place and Yunni was hungry, so we headed out to have something to eat nearby. Mickey ordered Russian soup as he wasn't hungry and Yunni has roe roast deer with dumplings and beetroot salad. We were thinking to go back here for dinner around 7.30pm. Apparently all restaurants in this small town closed early. We drive around to find restaurants but all closed, finally we settled with 56 inch pizza (third photo).
Dinner tonight consists of traditional polish food, goulash soup, sour soup, seahorse pork and bigos (fried cabbage with meat). I actually quite disappointed with the bigos as it had too much meat. I prefer it with more cabbage and it taste sweet as well not like other bigos I had eaten at different places. The soups also had a lot of meat but taste good and the staff was good.
Visited the beach in the morning as we tried to catch a boat to sail around the lake. Unfortunately we missed it, but we still enjoying ourselves as it was beautiful day with fantastic view