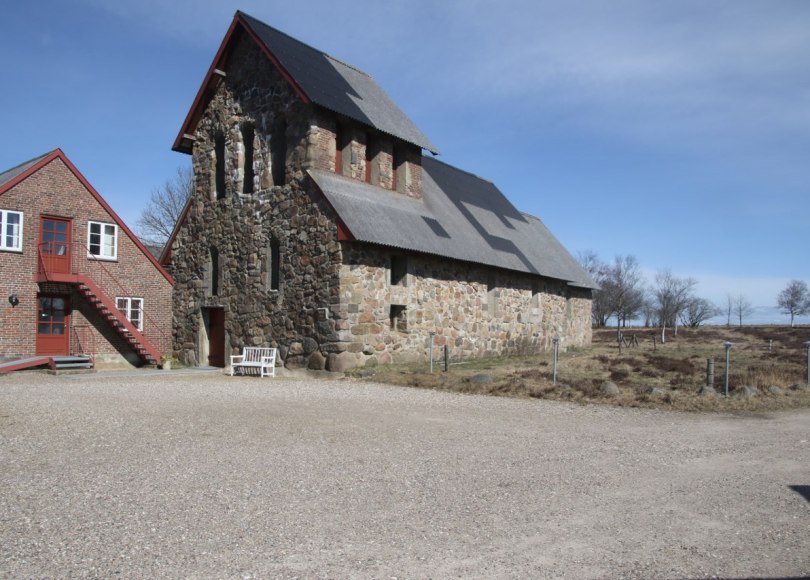 In the middle of the poor heath land in west Jutland you find a little surprise in the form of a little monastery called Hellig Kors Kloster – or monastery of the holy cross. The monastery is actually an evangelical monastery and not a catholic monastery.

The building look old but it isn’t really an old monastery – in fact it is a fairly new building – though some of the materials have been reused from a nearby church.

The monastery was founded in the 1950s when a priest and his wife started building the monastery. They had limited funds so they had to get some volunteers to come and help with the construction of the place. By the end of the 1950s they had enough funds to build a small house next to the monastery which were supposed to house some woman who should be a part of the religious community around the monastery. The complex was finally finished in 1975.

The buildings are pretty big and there is plenty of space for people to live here on a permanent basis. But it turns out the life at a monastery doesn’t really appeal to Danes and they never managed to attract a community of woman. Only one woman actually lived permanently at the monastery until she died in 2008 and now the building is uninhabited. Today nobody actually lives at the monastery but it is still in use by the local religious community which uses it for ceremonies on a regular basis.

The door to the monastery seem always to be open so visitors can drop by and look inside the church which is a pretty standard room for a stone church. The church is located in the middle of nowhere a short drive outside the village of Lem near Ringkøbing Fjord.

Exploring beautiful nature in Denmark
The horses are ready to go for a tour in Copenhagen
Enjoying a quiet place during covid crisis. Usually this place is packed with people. Today I can have the place myself.
This place was part of Copenhagen defend protecting the approach from the sea. However it never use. It was nice walk from this fortress
This statue remind me of Asia, where farmers work on their field.
These massive stones are from the 10th century. The older of the two Jelling stones was raised by King Gorm the Old, in memory of his wife Thyra. The larger stone was raised by King Gorm's son, Harald Bluetooth in memory of his parents, celebrating his conquest of Denmark and Norway and his conversion of the Danes to Christianity. The  inscriptions on these stones are considered the best known in Denmark and danish passport has the stone inscription and picture on its page.