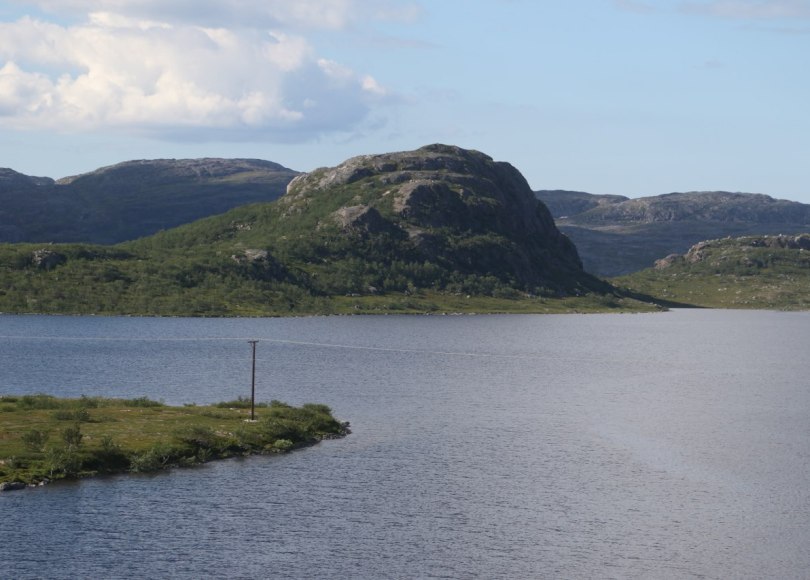 When you arrive in Kirkenes you might think you have reached the end of the road – and in some ways you have. The main road through Norway the E6 do end at the ferry terminal in Kirkenes and no major highway go further to the east or northeast of the city.

But there is a bit of Norwegian land to the east and north east of Kirkenes and we decide to head out and have a look at the area. The main road takes quickly takes us to the Russian border – we don’t cross the border for two reason. First we don’t have a Russian visa which would make it impossible to cross the border – second we don’t want to get a Russian visa since we will not be able to get back from Russia without having to undergo a two week quarantine and we might have to actually fly back to Denmark to do the quarantine and leave the car in Russia which doesn’t sound like a very appealing option. So we decide not to attempt any border crossing today.

Instead of crossing the border we turn left to drive straight north along a border river. This area used to be a no man land up till 1826 when a border was finally laid out in the area. Before 1826 the eastern Sami population would just roam freely in the area go back and further over what became a national border in 1826. When there was suddenly a border the traditional migration pattern of the Sami reindeer herders was disrupted and they had to start living within their own national borders.

The border did change over time and for a while the border to the east of Norway were actually Finland until Finland went out of the Second World War and the area was conquered by the Soviet Union making the area once again a part of the Russian Soviet republic.

After the national border was set up there were actually some Norwegians settling in the area. In 1851 a soldier who used to be stationed at the Vardøhus fortress in Vardø decide to move here and was later followed by around another 100 settlers to create a little frontier community.

You still get some of the frontier feeling up here with hardly anybody in sight and you drive along a river which is half Norwegian and half Russian. There are several signs indicating we are at a border area with extra surveillance and reminders you are not allowed to cross the border illegally or make contact with people on the other side of the river.

We drive along the river until we reach the water of the North Atlantic. Just before we reach the cost we pass the historic King Oscar Chapel which were built here as a border marker. We reach a little parking lot where there are actually a surprising number of people considering the limited traffic on the road we had been driving.

We enjoy the view from the northern beach for a while looking at the lonely northern ocean at the end of the road where nobody seems to live permanently though there is a few cabins in the area so the Norwegians might come here to enjoy a bit of midnight sun during their summer holiday.

We head back south and on the little road we pass a little shelter where a couple of Norwegian soldiers is staying. They look like they are enjoying the sun and have a little fire going so they can do a little barbeque if they need their lunch. They are pretty friendly and talkative and relaxed. I guess it is fairly easy but boring work keeping an eye on the NATO border.

We continue the drive towards Kirkenes – on the side of the road is a little sign indicating Norges eldste fjell which means the oldest mountain in Norway. We stop a little bit to have a look at the old mountain. The mountain doesn’t look particularly different from other mountains which apparently are younger than this one. Next to the old mountain is a field full of flowers – they look strange like it is cotton on the flowers in the field all white and fluffy.