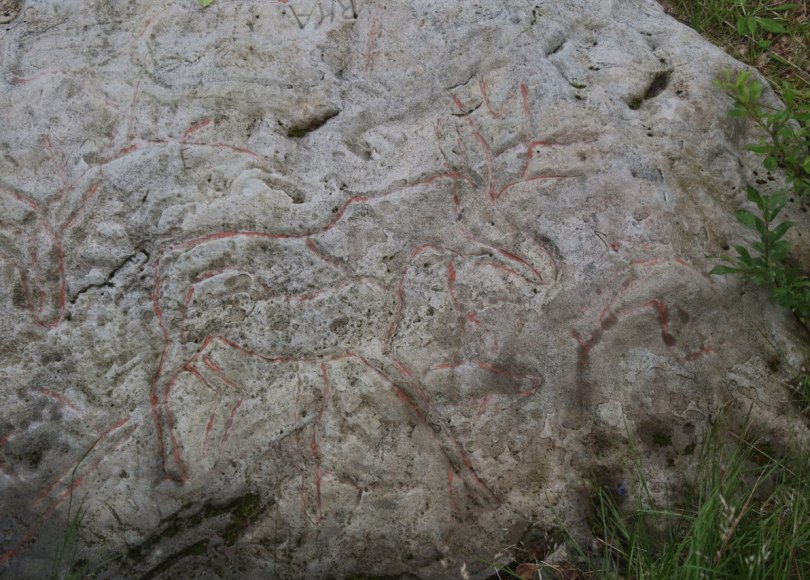 The tiny settlement of Forvik doesn’t look like much – but it has a very unique location at the water where the mainland of Norway ends. So there is easy access to the natural resources both of the land and the water just off shore. There are a couple of small islands just a short distance from Forvik. So it is easy to see why this area has been attractive to early people settling in the area.

Ancient people did come to take advantage of the options of this area. They settle in the area and decided to make a mark. They left behind ancient stone carvings – called helleristninger in the Nordic languages. When you are just about to arrive at the ferry terminal in Forvik you can turn right on the road leading away from the ferry terminal. A couple of kilometers drive down the road there is a tiny sign and a small parking lot.

Right here next to the road you will find a little collection of these ancient carvings. The carvings were of the animals the ancient people used to hunt and might have had some religious purpose or were supposed to bring good luck for the future hunts.

At this location there are carvings of the main animals of the area – the reindeer and the moose. Getting a moose must have been a huge price for the locals back then – they could live of the meat of such a large animal for days.

There are also carvings of fish – old people tended to get a large portion of their food from the sea. So they needed good luck with their fishing as well in addition to the hunting of larger game which might only have been successful occasionally.

The carvings outside Forvik isn’t the most impressive collection of carvings you can find in Norway but if you are not heading to Alta to see the famous carvings there these carvings are interesting.

Back to the same restaurant as the food is good. We actually went to the Monopol gastronomy restaurant, unfortunately we didn't book the table and surprisingly it was full, so we settled with this place. Both of us have duck stuff with meat and soup as a starter. Great food without pretended. Total cost € 29 including drinks
Exploring the city underground without any guide. The tunnel is well lit but kind of spooky since it was deep under and there is some soft polish music on certain areas and the rooms showing the activities in the old days, also the dungeon and punishment.
Cheers for the beers.
Hunting the dwarf in Wroclaw. There is 700 dwarf scattered around the city. We buy a map to find out the location of 100 dwarf. unfortunately we couldn't find all as it is just too much. It was fun go around the city and looking for this little guys in every corner, windows and everywhere. has anyone do the same thing while in Wroclaw??
No pork tonight. Both of us was really tired after a long day trip. So we search polish restaurant close to the hotel since our hotel restaurant only served western/International food.
The famous black maradona in wroclaw. We are here for 3.5 hours, not because the place is big, but we have to wait to see the painting revealed. We arrived at 10.30 am and there were a mass in progress so we wondered around the next buildings.