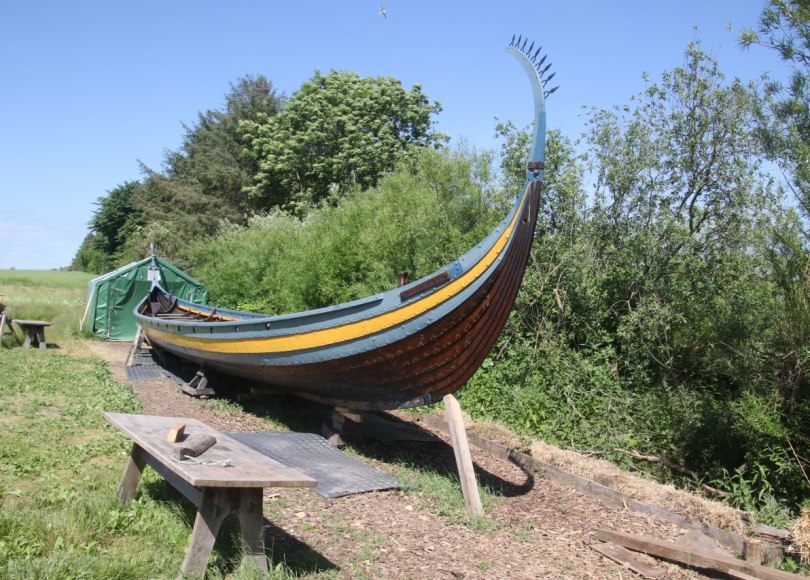 There has been several Viking ships found in Denmark – but there is only one ship which has been found as a grave site. The Viking ship at Ladby was a ship belonging to a rich local nobel man who was somewhere between a major lord and a local king. When he died he was buried in one of his old ships and was given many gifts in his grave. The ship was covered by a mount of turf grass and left there for posterity. The grave was undisturbed for a millennium until an interest archeologist started looking at the old mount.

It was discovered a ship was hiding under the grass and it was decided to investigate further – and the ships was rediscovered. Now they needed to make sure the ancient wood could survive and not just disintegrate completely. This took a long time but in the end it was decided to build a museum at the location of the Viking ship. The museum tells something about the history of the Viking era and you can go and visit to get a little knowledge of these important traders which dominated the North Atlantic Ocean a millennium ago and made it to North America almost 500 years before Columbus made it across the ocean.

The museum is fairly interesting if you want to learn more of the Viking history – but it isn’t the best museum of Vikings you will be able to find.

The main attraction is naturally the ship. The ship has actually never been moved from the burial mount – instead they have made sure the area is not flooded anymore and the wood has been preserved so it can stay here inside the burial mount. This Viking ship is actually the only Viking ship which is still at the location the Vikings left it a millennium ago – all other Viking ships you can go and visit in Denmark or Norway have been moved from where they were found to the Viking Ship museum in Roskilde or the museum in Oslo.

The visit to the mount is interesting – it is quite dark inside and a bit chilly which gives the whole scene a special mood when you go and have a look. You can even see some of the bones from the horses which were sacrificed at the burial of the old lord.

When you have been inside the mount you can go out and down to the water – down there is a recreation of the old ship to give you an idea of what it used to look like a millennium ago. It is actually a merchant vessel and not a war ship – the difference is the merchant vessel is broader and shorter compared to the war ships. The merchant vessels had a limited crew and they needed to use the sail for propulsion. On the other hand the warship had a large crew since they needed to transport the warriors to and from the battles. Therefore the ship had lots of strong men who could sit at the ores of the ship and make sure it could move at a fast pace. Therefore the warship were less reliant on the sail – in fact they would take down the sail when they approached land to give less of a warning to the locals in land and sail by the ores to the shore to hopefully land in secret so they could surprise the enemy – or get some gold from the local monastery.

Dinner at one of the square restaurants with fantastic view toward church.
We arrived just before 5pm at this place and Yunni was hungry, so we headed out to have something to eat nearby. Mickey ordered Russian soup as he wasn't hungry and Yunni has roe roast deer with dumplings and beetroot salad. We were thinking to go back here for dinner around 7.30pm. Apparently all restaurants in this small town closed early. We drive around to find restaurants but all closed, finally we settled with 56 inch pizza (third photo).
Dinner tonight consists of traditional polish food, goulash soup, sour soup, seahorse pork and bigos (fried cabbage with meat). I actually quite disappointed with the bigos as it had too much meat. I prefer it with more cabbage and it taste sweet as well not like other bigos I had eaten at different places. The soups also had a lot of meat but taste good and the staff was good.
Visited the beach in the morning as we tried to catch a boat to sail around the lake. Unfortunately we missed it, but we still enjoying ourselves as it was beautiful day with fantastic view
Dinners tonight of half duck with plum sauce and potatoes. The duck was off the bones very tender but the sauce was too sweet. The pork cutlet with fried cabbage and ham was defined. Great taste. Total cost €20 including drinks. People really eat well in Poland with such a small price.
Exploring the castle in Lidzbark and an impressive monastery in swieta lipka 28. The castle is interesting with beautiful architecture and underground passage. We also like the restaurant with fantastic view of the monastery, the food was good and very cheap. it is free to enter the monastery.