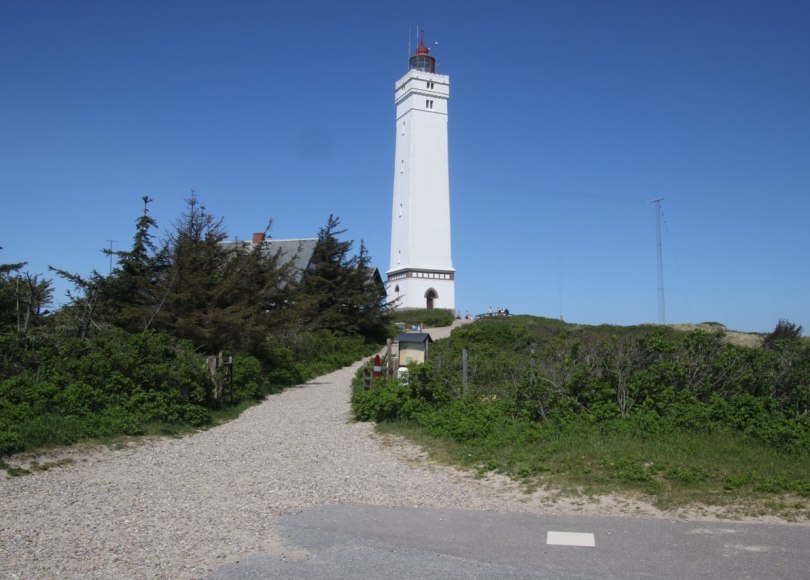 We drive across Jutland until we reach the small town of Blåvand which means blue water. There probably aren’t a lot of people living in this area all year round – but during the summer people come to this area in droves. This is one of the most popular places to go to stay in a summerhouse and usually Danes and Germans come here in the thousands. But currently there is no Germans just Danes in the area. Despite the lack of German tourist there are still quite a lot of people out here on a sunny spring day.

We drive through the small town until we reach Blåvands Hug. This place is famous as the most westerly point in Denmark so you pretty much have reaches the end of the road west when you get here. If you go further west the next land you will encounter will be UK across the North Sea.

The area here is dominated by some sand dunes and a large sandy beach. The most notable land mark here is the light house of Blåvands Hug which you usually can visit but the lighthouse was still closed when we went here. It is still nice to go and have a little look at the lighthouse.

After having taken a few pictures of the lighthouse we head to the beach. Down towards the beach we see one of the many remains from World War II a bunker which was built here by the Germans as a part of the Atlantic Wall which should protect all of Europe against attack from the western allies.

From the bunker we head down to the beach which is a very broad sandy beach like you find so many places along the west coast of Jutland. It is a bit of a walk to cross the beach and actually get your feet wet in the water if you like a swim. I don’t see anybody swimming today – I guess the water is still too cold for almost everybody.

We head back from the beach and back to the parking lot and start to explore the rest of the area.