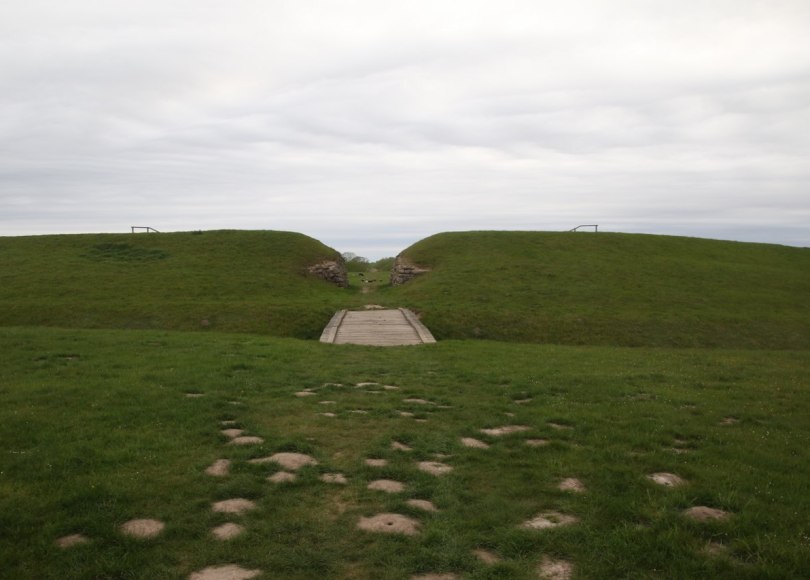 Trelleborg was built in 980 by King Harald Bluetooth – yes the king who gave the name to Bluetooth. He was the first king who ruled all of Denmark and had so much power he could actually start huge construction project spread all across the kingdom of Denmark. The time around 980 was a time of unrest with the German Emperor standing just south of the Danish border wanting to expand north. This led to a need for mobilizing the Danish strength to be able to go against a possible German invasion.

To mobilize the Danish military force a total of at least 7 ring fortresses were built across Denmark – the last one was discovered as late as 2014 so there might still be more to be found in the dirt beneath Denmark. The ring fortress was quite impressive constructions they had a diameter of at least 120 meters and the biggest Aggersborg were twice this at 240 meters in diameter.

We went to Trelleborg on the way home from and the museum was still closed because of the general restrictions and requirement of social distantsing. But the area of the ring fortress was still open so we could just walk in from the street – only the actual museum giving more explanation of the Viking history was closed.

The fortress is partly reconstructed and there is a pretty big wall which is much higher than what we have seen in other fortresses like Fyrkat and Aggersborg. Inside the fortress the grass area was dominated by a group of sheep’s who seem happy to eat the fresh grass and couldn’t care less about the history of the area.

When we went on the top of the dirt ring we could look down to the area where there were a few concrete markers to indicate where the old wood poles had been located in the old houses inside the fortress. There had been a total of 16 large wooden houses inside the ring and an additional 15 or so outside the main ring. These houses were protected by an outer ring around these houses.

Outside the fortress area you find a reconstruction of an old long house – this house is pretty old built in around 1942. The houses was built to try to give an impression of what the houses looked like – unfortunately later archeological evidence has made clear the reconstruction was not correct. They have never reconstructed a more correct version of the long house. Apparently the inside of the house is still representative of the original long houses – but given the house is closed we can’t have a look inside to see what it looked like.

Our visit to the fortress was pretty quick since there wasn’t a lot to see except the dirt wall around the sheep’s roaming where the houses used to be. The life of the original ring fortress wasn’t long either – the ring fortress only lived for a few years. The threatening German emperor died and he was succeeded by a young boy. The boy was no threat to any of his neighbors including Denmark so the need for a large military construction like the ring fortress was no longer needed. The ring fortress was torn down and forgot for centuries until they were rediscovered and can now be experienced several places across Denmark.