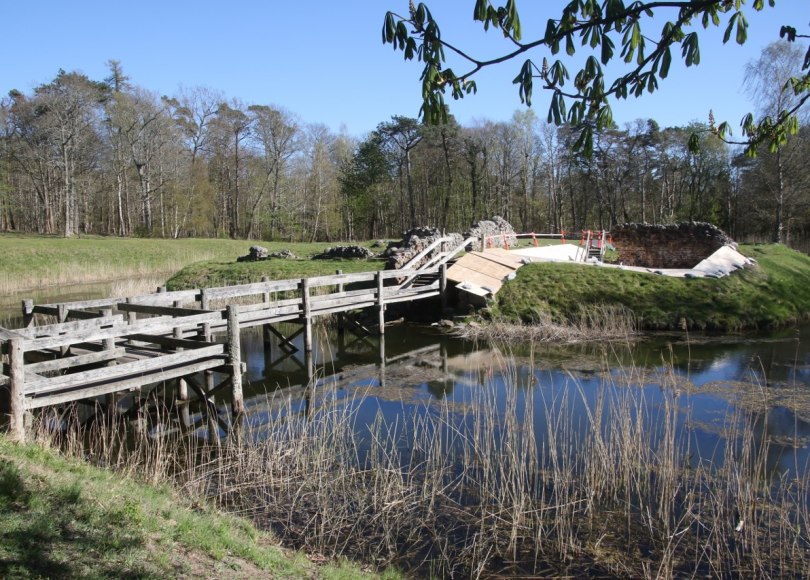 Inside the small forest of Tisvilde Hegn you find an old castle ruin. The castle was founded in the 12th century as part of the Asserbo Monastery. The founder of the monastery was Absalon who also were given Copenhagen as part of his possession and got the title as founder of Copenhagen.

The castle was owned by different noble men for the next few centuries until it was taken over by the king in the middle of the 16th century. During this time the sand were moving significantly in this area following the prevailing winds – and the castle and a nearby village were completely covered in 30 meters tall sand dunes.

The castle was forgotten for a few centuries until it was excavated in 1849 by 12 men from the royal guard. They had to remove 10,000 cubic meters of sand so the castle ruin was once again visible. Finally in 1972 the castle and the moth surrounding it were recreated and the area is now open to the public during their visits to the forest around the castle.

The castle is a nice spot to visit if you are around Tivildeleje and have some transport either a car or a bike. Otherwise you can walk from the beach in Tisvildeleje to the ruin and back but it is a fairly long walk.

Dinner at one of the square restaurants with fantastic view toward church.
We arrived just before 5pm at this place and Yunni was hungry, so we headed out to have something to eat nearby. Mickey ordered Russian soup as he wasn't hungry and Yunni has roe roast deer with dumplings and beetroot salad. We were thinking to go back here for dinner around 7.30pm. Apparently all restaurants in this small town closed early. We drive around to find restaurants but all closed, finally we settled with 56 inch pizza (third photo).
Dinner tonight consists of traditional polish food, goulash soup, sour soup, seahorse pork and bigos (fried cabbage with meat). I actually quite disappointed with the bigos as it had too much meat. I prefer it with more cabbage and it taste sweet as well not like other bigos I had eaten at different places. The soups also had a lot of meat but taste good and the staff was good.
Visited the beach in the morning as we tried to catch a boat to sail around the lake. Unfortunately we missed it, but we still enjoying ourselves as it was beautiful day with fantastic view
Dinners tonight of half duck with plum sauce and potatoes. The duck was off the bones very tender but the sauce was too sweet. The pork cutlet with fried cabbage and ham was defined. Great taste. Total cost €20 including drinks. People really eat well in Poland with such a small price.
Exploring the castle in Lidzbark and an impressive monastery in swieta lipka 28. The castle is interesting with beautiful architecture and underground passage. We also like the restaurant with fantastic view of the monastery, the food was good and very cheap. it is free to enter the monastery.