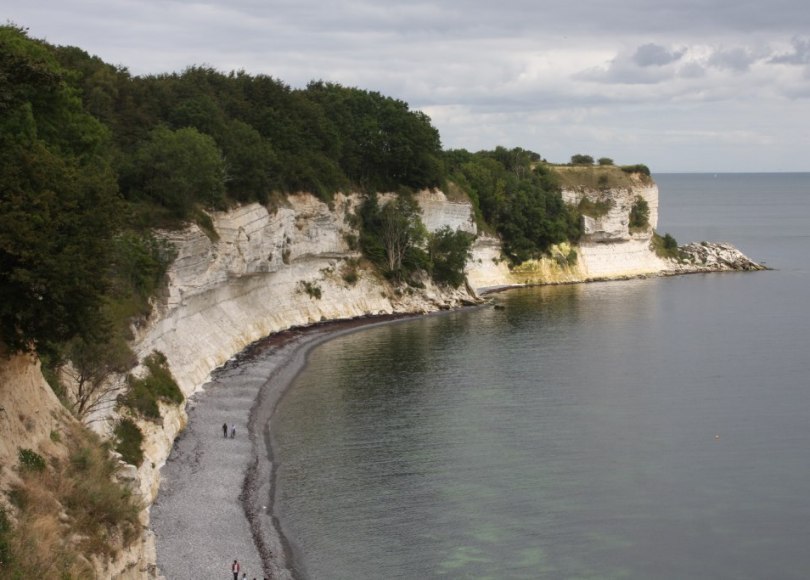 If you drive an hour or so out of Copenhagen you can reach a special area called Stevns Klint. The area has some large white cliffs facing the water outside and it has been accepted to the UNESCO world heritage list. The cliffs aren’t the most impressive cliffs you will experience – not even in Denmark.

So you might wonder why these cliffs have made it to the UNESCO list. Well the reason is a little bit of old clay – this clay is from the meteorite which hit earth some 65 million years ago and were the beginning of the last mass extinction in world history. The clay in these cliffs are the easiest to spot anywhere around the globe which is the reason the cliffs made it to the list. To be honest the clay isn’t all that easy to spot when you visit – but it is there.

The cliffs have been an import source of materials for the people living in the area for millennia. Back in the Stone Age the hunters in the area found many of the flint stones used to make their tools in and around the cliffs. The amount of flint in the cliffs was actually so abundant that the locals had a bit of an export business of flint to the people of Sweden and Norway where there wasn’t flint available. After the Stone Age the use of flints became obsolete for many militias but then in the 16th century there was a bit of use for flint again in the old muskets.

The cliffs were also used for building material – when bishop Absalon build the first castle in Copenhagen he got the stones from these cliffs. And chalk has been taken from the cliffs for centuries.

Today there isn’t a lot of industry using the resources of the cliffs so it is mainly a recreational area where people can go from Copenhagen and have a little daytrip in a natural setting.

A funny place to watch the cliffs is from an old church which was built in 13th century – back then the church lay somewhat inland but today it is right at the edge of the cliff. Actually the church was closed for several years because a landslide in 1928 caused part of the church to collapse and fall down to the cliffs below. Fortunately they have managed to stabilize the church today and you can go inside and have a look at the cliffs from the church.

You can go and have a little look at the cliffs and the beach below if you like to explore a bit more. And if you got the time you can continue your day trip down to Møns Klint which is the biggest set of white cliffs in Denmark.