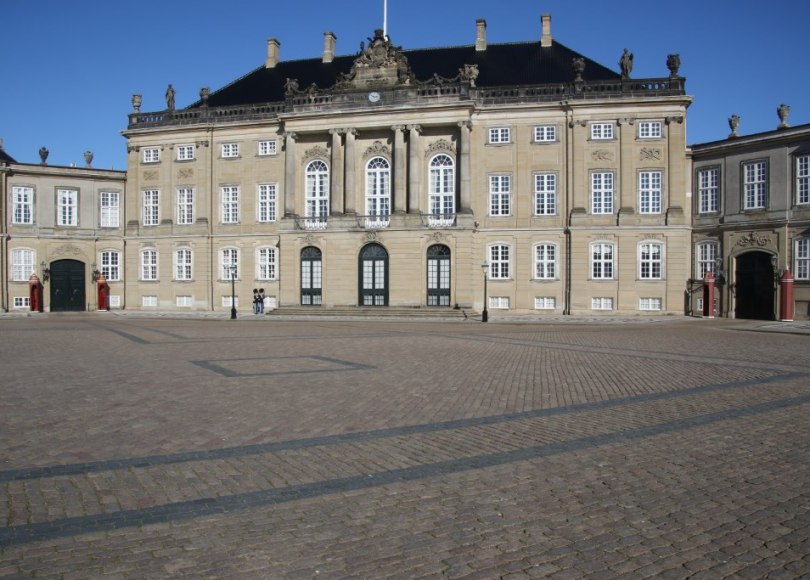 Amalienborg consist of four different mansions which looks alike. They were built around a square by four rich citizen of Copenhagen back in 1750-60. The mansions were not a castle but the square in front is actually called a castle square – this is due to fact there actually used to be a castle at this location and the square was the square in front of the former castle. The castle was built by a queen called Sophie Amalie and hence was named Sophie Amalienborg – and the last part of the name has stock till this day.

The royal family was not supposed to live at Amalienborg – but suddenly on a winter day of 26 February 1794 the royal family home at Christiansborg burned down. Suddenly the family needed a place to stay while a new palace was rebuilt for the king. They bought the four mansions to have a place to stay temporarily.

When the new palace was finally finished in 1828 the king decided not to move into the palace – apparently his short wife enjoyed the smaller rooms in Amalienborg which she thought made her look bigger than the major halls at Christiansborg palace. The royal family only used Christiansborg for representative purposes in the following years.

The only king actually moving to Christiansborg was King Frederik VII who gave Denmark the first free constitution in 1849. He lived at Christiansborg between 1852 and 1863. After this no king moved in at Christiansborg which had become the home of the Danish parliament – so to give some distance between the politicians and the king the royal family decided to stay at Amalienborg from this point in time.

At the middle of the square with the castle is the most famous equestrian statue in Copenhagen it is depicting King Frederik V who had started a lot of the development in the area of Amalienborg.

On one side of the square you will find a small construction with columns which look like they are made of marble – but in fact this is a cheap temporary construction made of wood which was put in place to make it easy to get from the crown prince mansion to the kings mansion. This was essential because during this time the king of Denmark were insane and the country was ruled by the crown prince – but formally there still had to be a lot of communication between the king and crown prince. The idea was to either tore down the colonnade or replaces it by an actual marble colonnade – but there weren’t enough funds to build a proper one and in the end the temporary colonnade was just left as it is.

On the square you will usually be able to see the changing of the guard at midday – but it is probably cancelled for the moment – to avoid too big crowds. It was actually funny to go and see the square today – it was devoid of tourist which rarely happens any more. Back when I was a kid there wouldn’t be anybody at the square on an ordinary week day out of the summer time since there was hardly any tourist in Copenhagen this has changed in recent years except right now. Another thing which has changed is that they have put in place pillars to block traffic from the square. This square in front of the royal palace was actually one of the last official buildings to be cut off to normal traffic – but last year it finally were requested by the police to block public vehicle access to the square.

On each side of the square you can see two big attractions – on one side you see the famous church called Marble Church which is probably the prettiest church in Copenhagen and on the other side you can spot the Amaliegarden and across the water the Copenhagen Opera House.