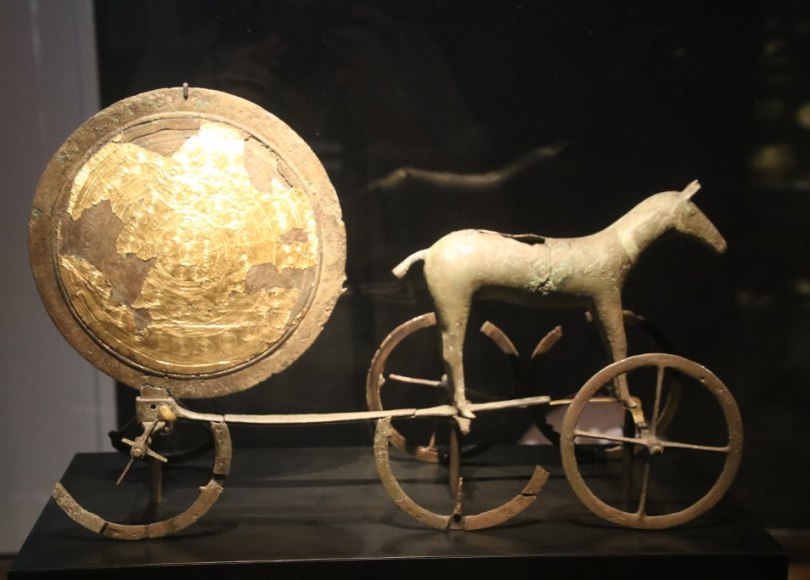 The Danish national museum is located in a mansion called Prinsens Palæ which used to be the home of the Crown Prince Frederik before he became King Frederik V. in 1892 the old mansion was transformed into the Danmarks National museum which is the main museum of Denmark.

The main things of interest in the museum is the many top archeological artefacts from the Danish pre-history up through the Viking age to the middle ages. All artefacts found in Denmark most be given to the National Museum which has the right to purchase them at market prices. This is why the collection of the old artefacts on this museum is second to none in Denmark.

At the ground floor of the museum have information about the oldest artefacts which dates back to the time of the first settlement of Denmark after the ice started to melt and the hunters followed the animals north to the edge of the ice cap were Denmark were located. First it was the reindeers which arrived but later other animals started to appear. There are a couple large skeletons of the different animals the first people hunted when they arrived in Denmark.

There is some helmet on display with horns – some people might consider the hornet helmet as something belonging in the Viking era but they are actually several centuries older and the Vikings didn’t go traveling abroad with horns on their helmets when they went out for international commerce.

One of the highlights of the museum is a small chariot called Solvognen – or the sun cart. The golden chariot is about 3,500 years old and found in an old bog where it stayed until 1902. The chariot is supposed to depict the sun as it moves across the sky drawn by a divine horse.

One of the prime sections of the museum is the collection of old rune stones – where there is the old carvings of the traditional Viking writing on the stone giving different small messages which has been preserved to the present day.

Obviously there is also a large section dedicated to the Vikings – naturally these few centuries has a large portion of the ground floor considering this is the only period where the Danish and other Norse sailors actually ruled a large part of the known world in Europe.

The ancient collection is probably the most fascinating but you can go on and explore the other parts of the museum which has large ethnological exhibits and displays of the life in the middle ages – so if you have a full day you can go up and look at these parts of the museum but if you only got half a day or less the old collection is probably enough to keep you busy.