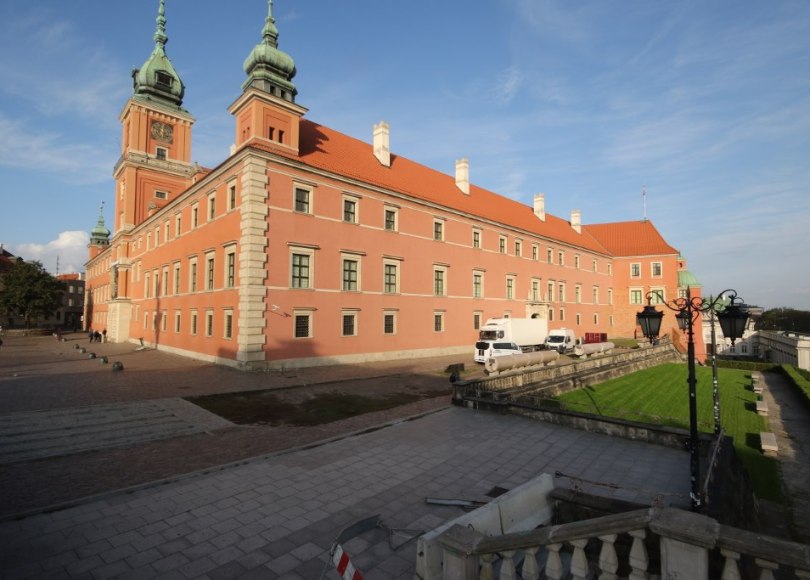 Poland hasn’t been a monarchy since 1795 when the country was divided for the third time between the major power in the eastern part of Europe back then – Austria, Russia and Prussia. But despite the lack of a royal family the royal castle still dominates the entrance to the old town of Warsaw. Since the castle is no longer used as a royal residence it has been transformed into a museum which is a nice spot to visit when you are going to the old town of Warsaw.

Through its long history the castle has repeatedly been rebuilt and severally damaged during wars. The latest destruction came during World War II when the Germans burned the castle during the occupation of Poland in 1939 and later during the Warsaw uprising in 1944 the castle was almost completely destroyed. Hence the current castle is a reconstruction of the older castle. It was rebuilt between 1971 and 1984 and has together with the reconstructed old town it has been listed as a UNESCO world heritage site.

We go inside the castle and go through the many rooms which consist of the old royal apartments. Some of the rooms are furnished – but a lot of them are pretty bare – I guess the war and destruction of the castle has destroyed most of the original furniture’s. Fortunately the rooms are very pretty even without furniture so it is nice to wonder through the many rooms.

#free cooking #tonight enjoying dinner at this place. The staff was very friendly and gives a good service. The food itself plentiful, good portion and tasty. We were very full after dinner and I had to skip half the pizza to make some space for the pasta and dessert. . . . . . . . . . . #eating #outing #enjoylife #lifestyle #lovely #loves #foodie #good #thankful #nightout#night #foodphoto #foodporn #travelblogger #foodblogger #Copenhagen #pasta #pizza #dessert #merry #sweet #hungry #fun #romantic #tiramisu #fun
Our last #tapas lunch in #barcelona #airport before boarding in a couple of hours. The holiday is over and it is time to go home. It has been great to be away from the cold weather in Copenhagen. But it is also nice to be home. . Iberia Croquettes . Tuna salad . Coca bread with Iberia ham . Spicy potatoes
A little bit of ocean view and swimming pool from our hotel room. We didn't try the pool as it would be too cold in this time of the year. The place is nice for a couple of nights relaxation and wonder around the other towns during day time. It is supposed to be popular beach resort in the area.
Finally i have my beach holiday at this place. We arrived after 8pm so we decided to have dinner tonight at the hotel restaurant since not many places open at this time of the year. The food was #delicious and the staff was friendly and the restaurant is huge. We have Lobster soup Ham & eggs with fries potatoes Seafood Veal with cheese Vanilla ice cream with chocolate Vanilla ice cream with pineapples . . . . . . . . . . #travelling #travelblogger  #dinner #instagram #instagood #photographer #happy #enjoy #fun #lifestyle #love #colorful #eat #traveltheword  #photooftheday  #foodie #foodies #foodpost #foodlover #foodporn #food #taste #foodtrip #delight #foodphoto #restaurant
Can you spot the flamingos??? Unfortunately i didnt bring my camera so cant zoom in the birds but its there. It was a nice short visit to see this peaceful and beautiful place. . . . . . . . . . . #travelling #exploring #travelblogger  #dinner #instagram #instagood #europe #Spain #europe_vacation #europetravel #photographer #happy #enjoy #fun #lifestyle #love #colorful #eat #traveltheword  #photooftheday #foodies #foodpost #calming #foodtrip #delight #flamingos #bird
Had tapas lunch after exploring the castle and before drive to another city. Food was good and reasonable in price. Cost €28.50 including 3 coca cola