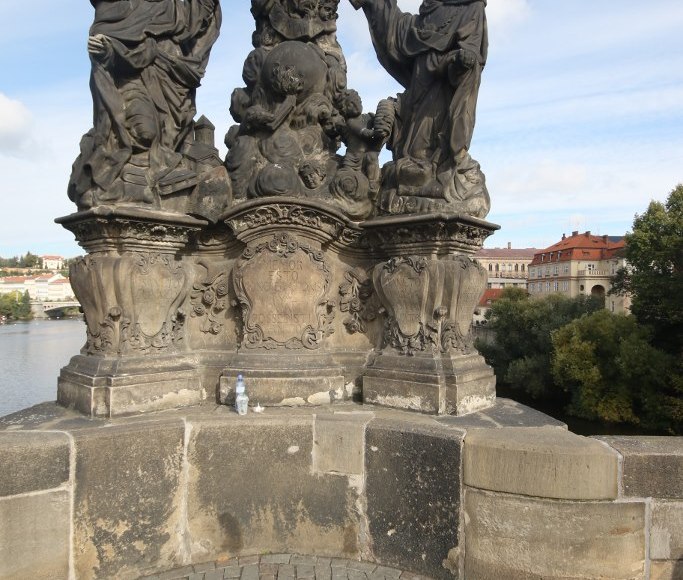 I been to the bridge in Prague several times – it is kind of a must visit if you are in town. And everybody goes to see the old bridge. The construction of the bridge started in 1357 – it was actually started at a very specific time when the first stone were laid at 5.31 9 of July. This way the exact time was a palindrome 1357 9 7 5.31.

The bridge was the scene of different historic events during its long history. After a revolt against the rulers the rebel leaders were executed and their heads were put on display on the bridge in 1621 to deter future revolts against the rulers. Later during the European 30 year war a battle actually took place on the bridge itself in 1648. The bridge was damaged during the battle but the bridge did survive to serve the population of Prague till this day. Several floods of the river have also caused damage to the bridge over the centuries but it has survived them all.

On the bridge are several baroque statues – the original has actually been taken down so what you will look at today is replica of the originals. The fact it is copies doesn’t seem to deter the tourist – they come in the thousands all year round making the bridge the most visited and crowded tourist attraction of Prague. You can walk across the bridge and see the statues while you enjoy the view of the Prague castle.

There are a lot of people on the bridge on all times of the day so it isn’t a quite experience to go across the bridge. There a lot of street fenders selling stuff along the bridge as well.

I guess it is the most famous attraction in Prague – but I didn’t like it the first times I went to Prague and going back there 15 years later hasn’t changed my opinion of the bridge. I find it too crowded for what it is with too many tourists to really be enjoyable to go and explore it.