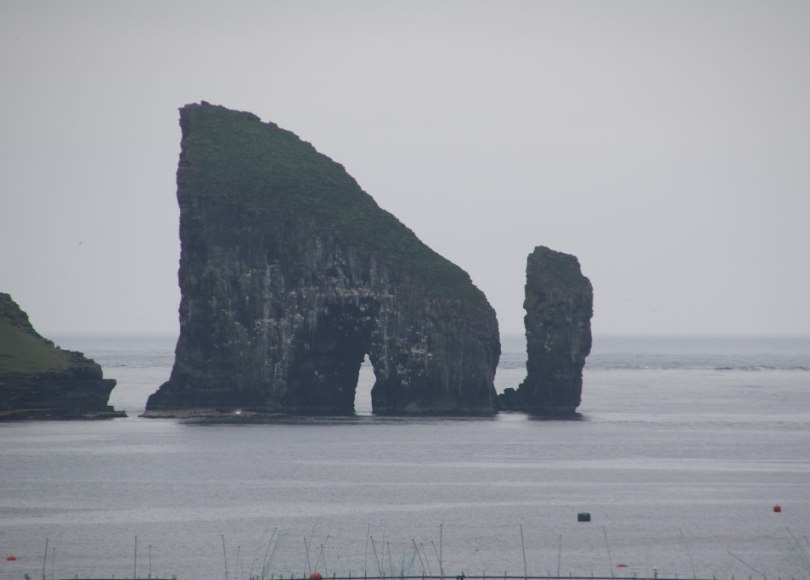 We have taken a morning flight to the Faroe Islands. We arrive at the only airport on the island and from there we get out to the rental car which is parked on parking lot across the street from the airport. The rental companies around here are self-service so we just have to pick up the rental car from the parking lot and then drive along.

When we find the car it has a pretty big scratch on the left front bumper – there is nowhere to complain or make sure the damage is noted by the company so we just take a lot of photos of the car and the damages on the car which isn’t really limited to the big scratch but the other scratches are fairly minor.

We drive out of the lot to the northern end of the island. The road up there is really scenic with great views of the ocean to the one side and a small grassy mountain on the other side of the road. There isn’t a lot of traffic up here since there are only two small villages along the road.

The last village is the small town of Gasadalur which currently has a population of 17 people – so the tourists easily outnumber the locals when we get there. It is fairly new you can get to the village so easily – they have opened a tunnel to the village which has finally connected the village with the rest of the island. Before they dug the tunnel you could only reach the city by sea or by walking across the mountain. Back in the days the village only regular contact to the outside world was the post man walking across the mountain three times a week making sure the locals could get their mail and newspapers informing them about what were going on in the outside world.

The town is located at the edge of the water and several of the houses in the village are old with grass on the roof. The flight up here has taken a while so it is about lunchtime when we get to the village.

With the limited number of local residents it probably shouldn’t come as a surprise the number of local restaurants is fairly limited. The total selection is one restaurant which serves open face Danish sandwiches and cake – we decide to go for the sandwiches. Unfortunately the quality is pretty low. They are using old stale bread so the food is barely eatable. We are not really full but there seem no point in ordering more and increasing the displeasure of eating the mediocre meal.

After finishing the lunch we go out and have a little look around the village. There are a few trails leading up the mountain – but we settle for a short walk down to the coast. From the end of the trail there is a view of the cliffs along the shore of the island and a small waterfall dropping right down into the ocean.