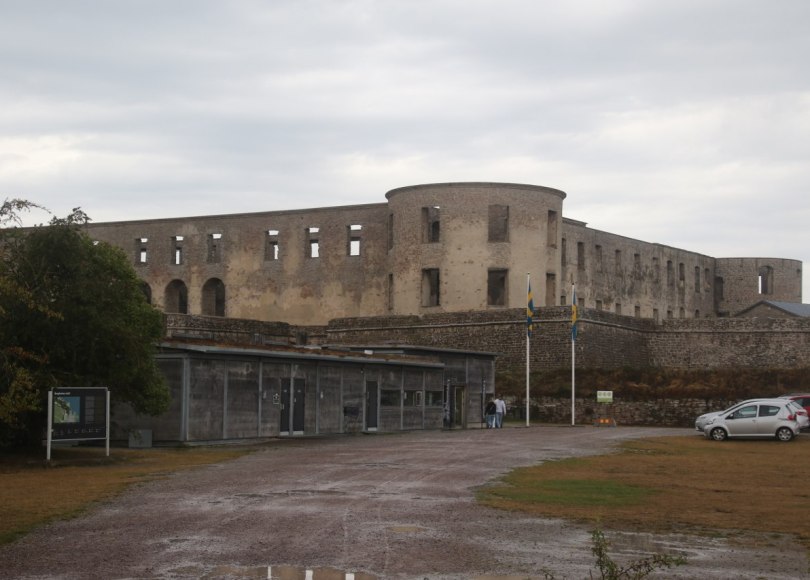 The island of Öland used to be a contested island between Denmark and Sweden since it was located at the historical border between the two countries. To complicate matters further there were also a significant presence of different German fiefdoms which at different times tried to further their interest in the island.

With the island being so contested it can hardly come as a surprise the islands was the location of one of the first fortifications build by the Swedish kings in 1281. The Borgholm castle is located right at the narrow straight of Kalmar Sound only a short distance from the city of Kalmar across the water – in the city of Kalmar there was also an important castle on the Swedish side of the border towards Denmark.

The castle changed hands in the later years until the signing of the Kalmar Union in 1397 when all of Scandinavia was united under the Danish king – or actually the ruling woman Margrethe I. She united the largest landmass anywhere in Europe under one ruler at this time. In addition to the three kingdoms Denmark, Norway and Sweden the Kalmar Union also included the holdings in Iceland, Faroe Islands, Greenland, Orkney and Shetland Islands in addition to parts of northern Germany.

The united kingdom of Scandinavia didn’t last long – the swedes soon started to rebel against their Danish lords. During the Swedish rebellion the castle was involved in several skirmishes and by the time Gustav Vasa became the king of an independent Sweden in 1523 the castle were in ruins. The castle was once again located at the border to Denmark hence the Swedish kings decided to rebuild the castle to have a stronghold at the borderland. From 1572 to 1592 the castle was reconstructed as a renaissance castle.

The new castle didn’t survive for long. During the Kalmar war from 1611 to 1613 the castle were severely damaged and not much were left of the old structure. The Swedish kings decided to rebuild the castle in the 1650s – but a new war was ranging between Denmark and Sweden – it ended in the unfortunate peace at Roskilde in 1658 in which the traditional Danish territories of Skåne, Halland and Blekinge were transferred to Sweden. This meant the island of Öland no longer were anywhere close to the border against Denmark and the importance of the castle were lost.

The castle was finally abandoned in 18th century and it was further damaged by fire in 1806. Since 1880 works has been done to preserve what remains of the castle. Today the castle ruins have been turned into a museum and you can go and enjoy the castle and the ruins including some small exhibition at the caste. It is one of the main attractions of the island and well worth a visit if you are on Öland.

Lunch at the hotel close to the airport since our holiday is almost over. Have to catch a 7 am flight back to Copenhagen, so have to wake up at 4am tomorrow since we have to return the rental car.
Yunni was lazy to walk to the center to find a tapas restaurant and decided to eat at the hotel restaurant.
Having lunch at this tiny town up in the mountains.
Salamanca is a very beautiful city. Both of us love the place. There are so many pretty old buildings with carving, arches, old roman Bridge, library, hotels, churches Square,etc.
Trying the food at the casino. We see the place was really packed, which is a good sign. We really like the cool mussels, it was delicious.
Currently having lunch here. This place located next to the motorway toward Madrid. We decided to stop after 2 hours drive.