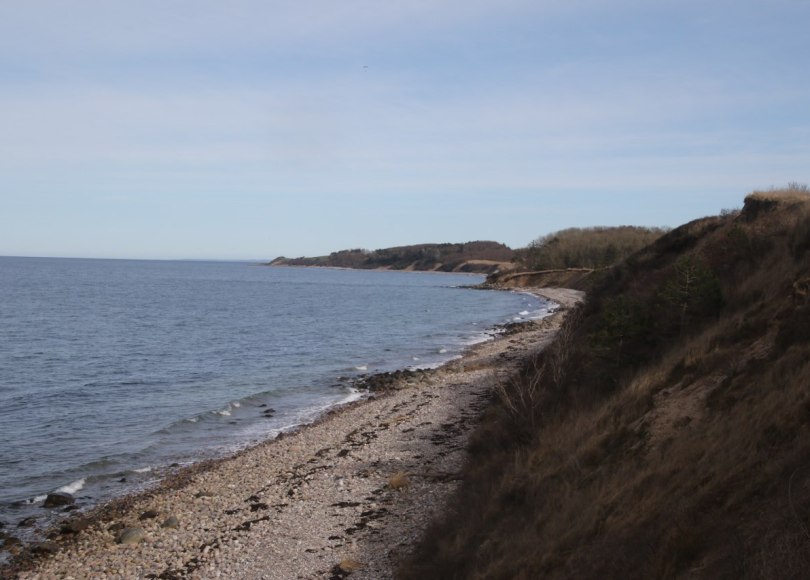 Just outside the town of Kalundborg you find a little quiet peninsula. There are a few small towns along the road heading to the peninsula and along the road you can see several stone settings which probably date back a very long time. The real interesting area of the Røsnes peninsula is found at the end of the road. So basically just keep on driving until you can go no more – when the road ends you can park the car and walk through the forest to the end of the peninsula.

The area has been an important military area for centuries. Røsnæs was close to the northern entrance to the Great Belt one of the two passageways from the North Sea to the Baltic Sea. This made it a target during wars and during the Napoleon Wars the men of the area was conscripted into a local militia which should protect the area against possible attacks from the British who might want to occupy this important area to secure the passage of British vessels to and from Russia. Not much remains from this old fortification.

During the Second World War the Germans decided to put a detachment at the location to have control of the passage to the Baltic Sea through Danish waters. They fortified the area and had a little observation station at the end of the peninsula.

During the cold war the Danish military realized this was an important location to guard in case the Soviet navy would try to break out to the North Sea during a potential conflict. The Danish government decided to build a radar station at the position to observe the shipping going through the area. There is still a little military observation post at the end of the peninsula until this day.

To reach the end of the peninsula you have to walk through an old forest which is left to its own – there are many old trees which have fallen and is just left to rot and be replaced by new trees as times go by. The dead wood is home to a variety of different insects which enjoys the dead wood.

At the end of the peninsula you find the small military observation post – but a much bigger building is the light house which has been guiding the ships sailing by for more than a century. There is also a little museum at the lighthouse – the museum is closed for the moment but there is some display outside. There is the story of the Danish navy and the way Denmark has been spread around the world through history going back to the Vikings when they ruled the North Sea Empire consisting of Denmark, Norway and England plus large parts of Scotland and what is now northern Germany.