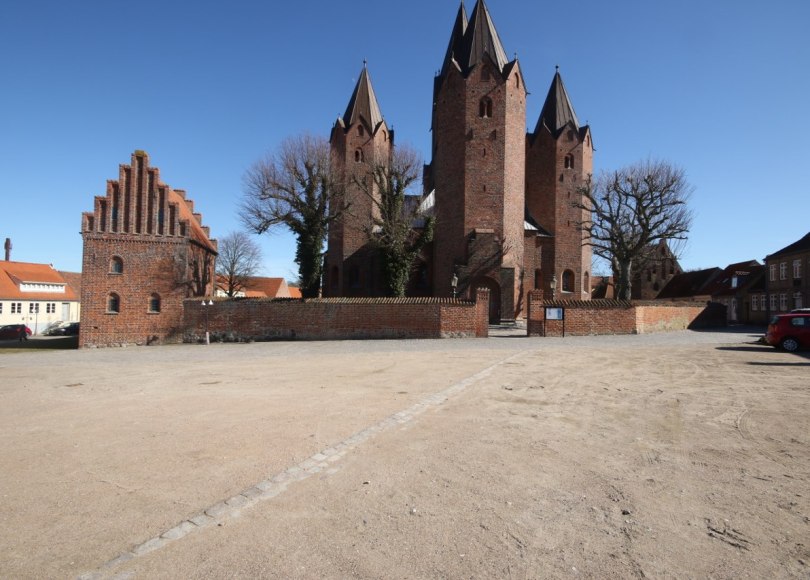 The town of Kalundborg is located at the western end of Zealand. It has been a fairly important town for centuries as one of the most important trading post in the area. The city had a connection to the powerful Hvide family. The city is supposedly founded by Esbern Snarre in 1167 when he built a fortress in the city – this was the same year when his brother Bishop Absalon got Copenhagen city as the seat for his parish and started to build the castle of Copenhagen.

The city has been an important trading post all through its history mainly helped by the good location between the two peninsulas Røsnæs and Asnæs. They give some protection for the harbor of the city. Kalundborg is a natural crossing point from Zealand to the eastern part of Jutland and the city of Kalundborg is still a transportation hub till today. There is a railway connecting the city to Copenhagen and there used to be ferries to Aarhus in Jutland making this crossing one of the quickest ways to go to Aarhus from Copenhagen. Today the old ferry route has been disconnected and there is only a small ferry going to the island of Samsø in the water between Zealand and Jutland.

The town main claim to fame is the large church called vor frue kirke or the church of Our Lady. The construction of the church was started by Esbern Snarre but it wasn’t finished in his lifetime so the completion of the church was left to his daughter and son in law. The church actually has a unique design which is found nowhere else in Denmark or the rest of the world for that matter. The church is designed as a Greek cross with a tower at each end of the cross and one in the middle. This gives the church a unique appearance with five towers close together. It is thought the design of the church might be inspired by Esbern who had been on crusade to Jerusalem and had seen the Church on the Holy Sepulchre.

The church is in the middle of the old town of Kalundborg and it is the natural point to start a little walk around the town. In addition to the old church the city is known to have the largest collection of medieval stone houses in any city in Denmark. One of the houses is right next to the church and used to be a priest house as well. The other stone houses are fairly close to the church as well – the old town of Kalundborg isn’t all that large so everything is within easy walking distance.

Next to the church is the museum of Kalundborg which is located in an old house. Behind the museum is a little garden which has some historic plants and there is also a little pond with a model of the old town of Kalundborg.

The other main attraction of Kalundborg is the harbor area – many comes here as a short stop on the way to the ferry to Samsø but it is also a nice place to enjoy the water and the small cafes and restaurants which is down at the harbor area.

Back to the same restaurant as the food is good. We actually went to the Monopol gastronomy restaurant, unfortunately we didn't book the table and surprisingly it was full, so we settled with this place. Both of us have duck stuff with meat and soup as a starter. Great food without pretended. Total cost € 29 including drinks
Exploring the city underground without any guide. The tunnel is well lit but kind of spooky since it was deep under and there is some soft polish music on certain areas and the rooms showing the activities in the old days, also the dungeon and punishment.
Cheers for the beers.
Hunting the dwarf in Wroclaw. There is 700 dwarf scattered around the city. We buy a map to find out the location of 100 dwarf. unfortunately we couldn't find all as it is just too much. It was fun go around the city and looking for this little guys in every corner, windows and everywhere. has anyone do the same thing while in Wroclaw??
No pork tonight. Both of us was really tired after a long day trip. So we search polish restaurant close to the hotel since our hotel restaurant only served western/International food.
The famous black maradona in wroclaw. We are here for 3.5 hours, not because the place is big, but we have to wait to see the painting revealed. We arrived at 10.30 am and there were a mass in progress so we wondered around the next buildings.