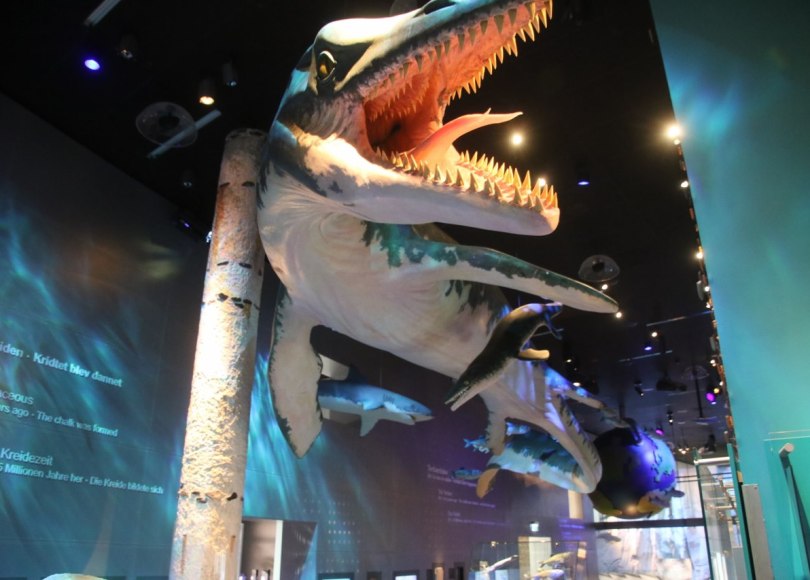 The most fascinating geological feature in Denmark is Møns Klint. The area is a high white cliff standing right next to the Baltic Sea. The cliff is actually old seabed consisting of chalk which has been moved by a large earthquake many years ago. Fortunately the area around Denmark is fairly stable in a geological sense so these kinds of major earthquakes doesn’t happen on a regular basis and the last major quake was probably millions of years ago.

The area around the cliff is wonderful to go and explore and you can search for no less than 18 different species of orchids around the cliffs as well. If you like to know more about the history of the cliff you can go indoor and explore the large museum called Geocenter Møns Klint.

The geocenter tells the prehistory of the oceans when the chalk was formed millions of years ago. There is exhibitions of the life which were in the water back during this period – the ocean around Denmark was certainly a much more dangerous place to go for a swim back then. You could get eaten by giant sea living dinosaurs.

One of the main findings in the cliffs is thunderbolts. These thunderbolts are the skeleton remains of giant octopus which used to live in the water during the time when the chalk bottom of the ocean was formed.

One special exhibition is the story of the first dinosaur which has been excavated in the Danish realm. The dinosaur is actually not found in the main part of Denmark but further north on Greenland where an expedition did the excavation of the dinosaur.

Included in the ticket to the geocenter access to the movie theater which shows several short movies about the history of the area. There are several different movies and if you got the time it is worth going in and get a little info in the dark.