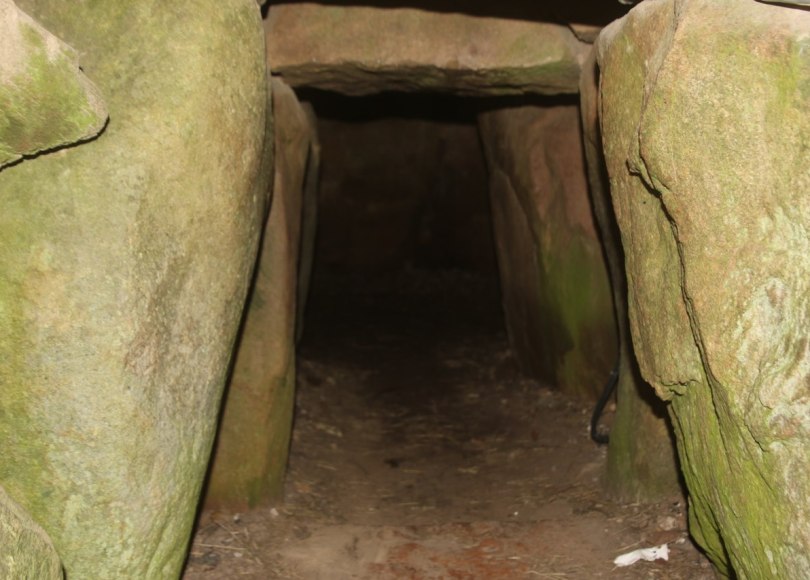 Spread across Denmark you can find many ancient graves. They date back more than 5,000 years from the time when the land was settled by farmers who needed to make a mark to claim the land for their family and honor their ancestors who initially claimed the land for the family.

The graves were quite big undertakings where they gathered many large boulders to form the inner part of the grave and then topped the stone setting with a large mound of turf grass to give protection to the inner grave against the Danish climate.

The one we are visiting is actually a double grave with two entrances to two different grave chambers under the grass turf hill. The entrance to the grave is narrow and very low so every adult will have to crawl and for large size Danes it is really tight and dark to go in and explore so we didn’t actually go inside to the chamber and only stayed at the outside and looked at the entrance path.

The double graves is only found on Zealand and not in Skåne or Jutland were a similar culture used to be present – this version of the graves were endemic to Zealand and a few minor islands next to Zealand. The graves were not intended for just one important person – in fact it was a mass grave and in some of the graves you have found up to a hundred buddies buried inside.

This particular grave called Troldstue or troll living room was excavated in 1909 and inside was found the remains of 30 adults and several children. You also found several important items which had been given as offering for some of the deceased people. One item was a particularly well cut flint stone dagger which dates back to the period between 2,400 and 1,800 BC indicating the grave was mainly used during this time period.