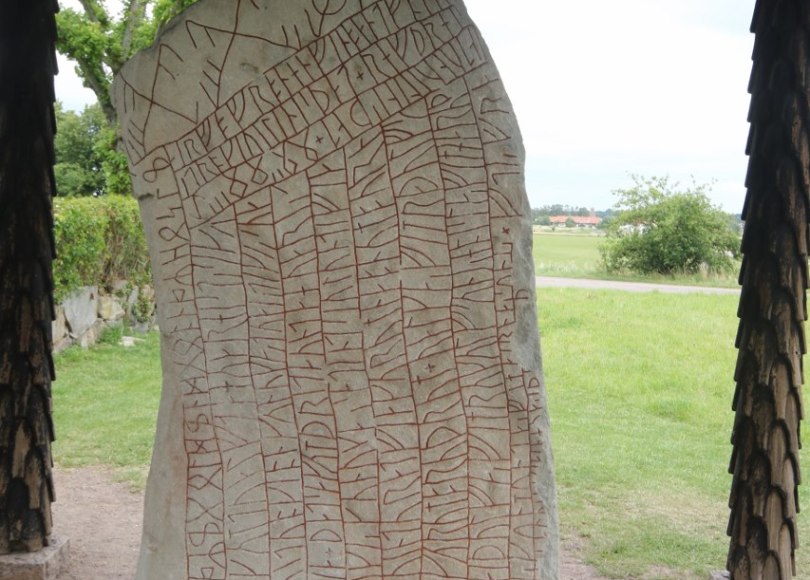 The most famous rune stone in Sweden is the Rökstenen. It dates back to the ninth century and it is famous as the rune stone with longest text ever found in Sweden. It is located in the open just outside a church a short distance from the large Vadstena castle. The stone is covered by a roof to protect it from the elements and save the ancient carvings on the stone.

The stone is fully covered in text on all sides so you can walk around the stone and see the text. I assume you are not familiar with the rune text and the Old Norse language which will make it somewhat difficult to read the test. But you should give up – there is actually a large sign with a translation of the text into Swedish and parts of the text into English as well so most people can get a little glimpse of what is written on the stone.

The stories are of ancient heroes and possible a claim to the family heritage dating back to these ancient figures. Even though there is a translation of the stone the meaning of the words is still somewhat up to debate today so the story of the stone is not fully known.

You don’t really need to know the story on the stone to appreciate the ancient wonder. You can simply stop at the little church and go in and see the stone under the roof cover. It is a fairly famous stone but there doesn’t seem to be a lot of people visiting the place so we had it to ourselves in the middle of what must have been the high season.