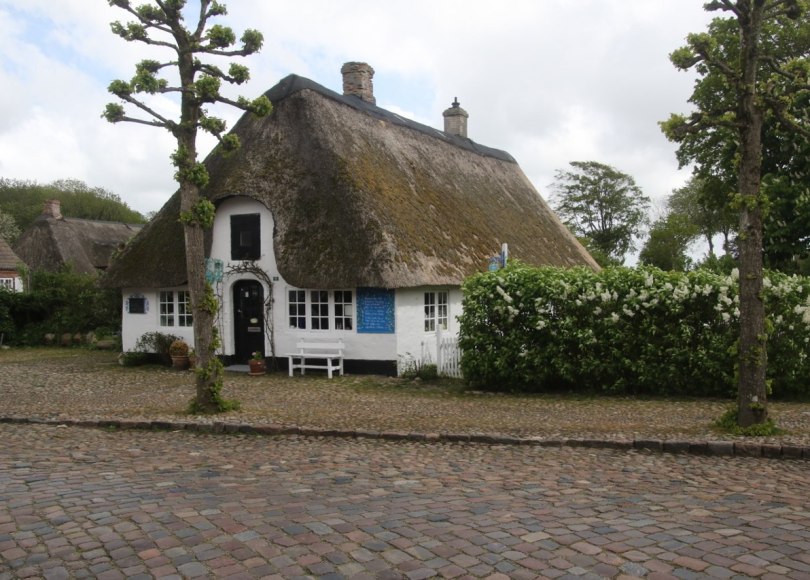 Just a bit north of the border to Germany you find a small old town of Møgeltønder – it is located close by the bigger city of Tønder. The village has less than a thousand people living there but it is fairly famous in Denmark helped by a long history which stretch back to at least the 4th century where the most famous archeological artifact in Denmark (guldhornene golden horns) were put in the ground on a field a bit outside Møgeltønder.

The present town consists of a lot of houses of which most are fairly old – this is particularly the case on Slotsgaden (Castle Street) which leads down to Schackenborg castle which is located just at the edge of the village. The houses of this street are very charming and the main highlight of the city is just to walk up and down the street to enjoy the cobbled stones and the trees along the street in front of the houses.

The castle is one cause of fame for the city. The castle was owned by the Schack family for centuries the family bought the castle in 1661 and kept it until 1978 when the last count sold the castle to Queen Margrethe II who would give the castle to her second son so he had something to do when he grew up. The presence of the prince in the village gave a boom to tourism which culminated when he married for the second time in the local church in 2008.

Unfortunately the prince was without any talents like the members in the royal family in general – this is what happens when you go by heredity instead of skills in choosing people. So the prince pretty much ran the estate into the ground and during his managing the farming at the castle he managed to acquire a total debt of around 42 million DKK or almost 6 million €. He was pretty much broke and decided to sell the castle – of course nobody would by the estate on the free market for a price which would make the prince repay his debt but the royal family has rich friends.

A couple of local industrialist owning some of the biggest Danish companies gave a donation to a trust which bought the castle from the prince so he could buy a new house in Copenhagen and continue spending more money than he should.

The local tourism agency expected the tourism to drop by 20-35 percent – I am not sure if this is the case – but there wasn’t a lot of tourist when we went by so it was a nice quiet stroll along the main street to enjoy the small houses.

Another current attraction of the village is the inn which is located right next to the castle. This little inn is one of the best restaurants in the area and if you are here it is worth going inside for the excellent food and enjoy a meal. The restaurant might book out during the main season so if you are here in the summertime or in a weekend in the fall you better book ahead.