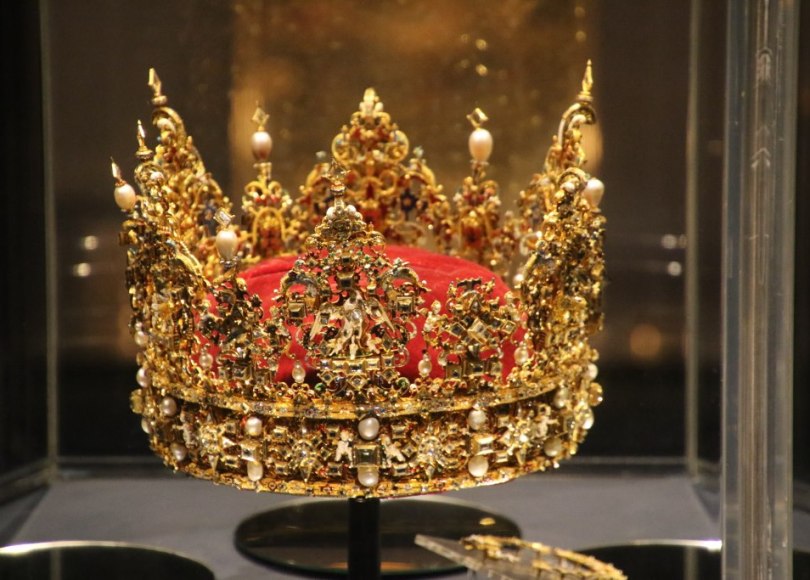 In the basement under the Rosenborg Castle you find the most important collection of jewelry in Denmark. Rosenborg houses the Danish royal family treasury with the main royal jewelry.

In the basement one of the first things you see is a collection of wine barrels – the Rosenborg Wine is very famous in Denmark as a special wine served by the Danish royal family on special occasions like the New Year dinner where all the ministers of the government are present. Apparently citizen of Copenhagen who can trace their ancestry back for a least three generations are also entitled to have a glass of the Rosenborg Wine on their dead bed – and it is highly likely to speed up the process putting the dying out of his or her misery since the wine is really undrinkable.

The wine dates back to the 17th century where the first barrels with some German wine arrived – these barrels has been topped up every now and then to make sure there was still wine in the barrels. The wine is way pass it possible lifespan and hence it is extremely sour – indeed the wine is only served in a small glass with a sugar cube next to it to make it possible for the dinners to drink it.

The wine isn’t the main attraction of the museum but the crown and scepter of the kings of Denmark is also on display and other items which has been used during the period of the supreme rule of the royal family in Denmark which is no longer in use since the kings and queens of Denmark no longer gets crowned.

There are also a collection of small ivory items – part of the reason for the collection of ivory is the Danish king had the easiest access to ivory of all the European monarchs. When you hear about ivory you might think of the tusk of elephants – hence it is an item which comes from Africa and Asia where they have elephants. But you can actually also get ivory from walrus tusks – and since the Danish kings used to rule the north Atlantic area with Iceland, Greenland and Norway up until 1814 they did have the best access to walrus tusk of any monarchs.

There are also a large collection of weapons on display down in the basement for those who are interested in ancient weapons.