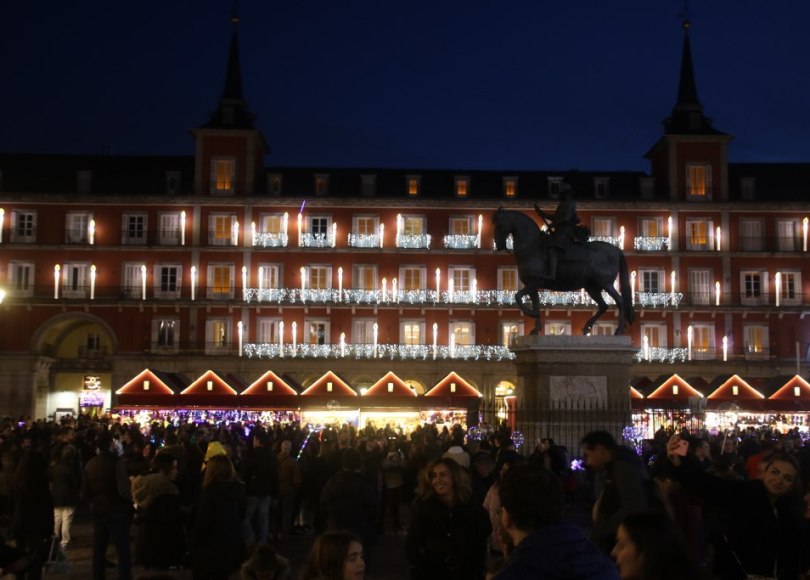 It seems like any Spanish town has a Plaza Mayor in the center – I guess the name major square of the city just has some appeal to the Spaniards so they need to have one in their town. The most impressive of the Plaza Mayors are probably the one in Madrid.

We have been to the square both during the summer and now during the winter. During the summer month it is a nice place to sit and enjoy a meal while you are looking at life passing by. At the end of December it might be a bit chilly to sit outside for too long but if there is a bit of sun it might actually still be an option.

When we got here at the end of December the Christmas still wasn’t over despite it was after Christmas day. There was a big Christmas market still going on at the square – and there were a lot of small shops in red wooden buildings around the square. They still sell all sorts of Christmas stuff here after the end of the main part of the holidays. There are a lot of people walking around the square during the day – it seems like the place people come to relax during the holidays with their kids.

We finally reach square again. And it is really packed at night time – it seems like half the population of Madrid has congregated at the square for the night. The square is pretty at night with the lights on the Christmas tree on the square – it isn’t actually a tree but a light installation which looks pretty at night. There is also some pretty light on the different shops around the square.