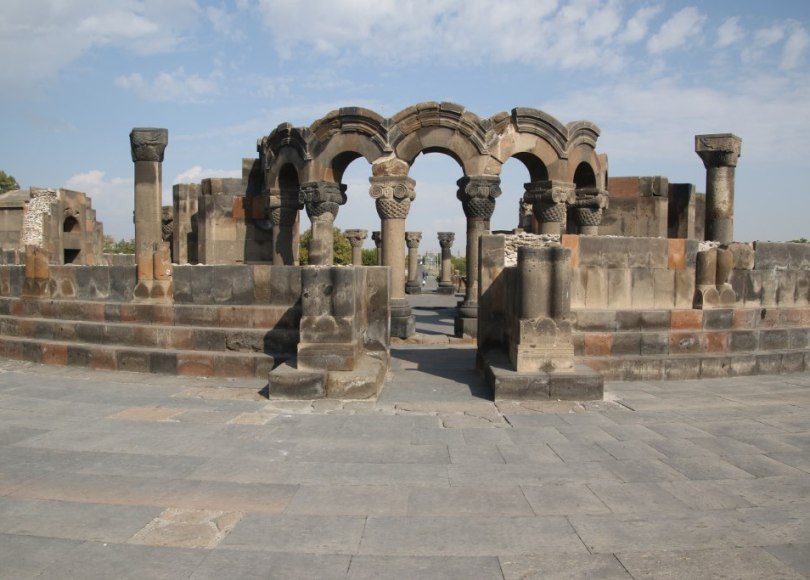 We have sort of come towards the end of our trip around Armenia and we have to start driving back towards Georgia to return the car and catch our flight. Fortunately we still have a little time left so we don’t have to take the main highway north from Yerevan towards Tbilisi. Instead we drive west towards the city of Echmiadzin. On the way to the small town we drive by the ancient cathedral of Zvartnots.

The cathedral was built in the second half of the 7th century and when it was finished it was supposedly the most beautiful church in the world. Unfortunately a large earthquake destroyed the church in the 10th century so we can’t go and enjoy the alleged splendor any more. The ruins have been changed into a museum so you can go and explore the ancient ruins.

There is only a couple of other guest visiting the museum when we go so we have the place pretty unspoiled and can go around and explore the sight. The main feature is the large remains of the church which has some small remains of a reconstructed wall and a lot of pretty big pillars which probably used to hold up the roof before it collapsed during the earthquake.

What remains of the church can give an indication of what used to be – we get the impression the church would have been one of the great churches of the ancient time.

Behind the church are some more ruins from the time the church was still standing. The remains are not quite as interesting as the church but we still have a wonder around the old ruins.

At the very back of the area is a small museum. There is a few remains found at the location but I find the most interesting item in the exhibition is the model of the church. If the model is accurate the church was much different from what I had expected. There are several levels to the church rising up high from the ground.