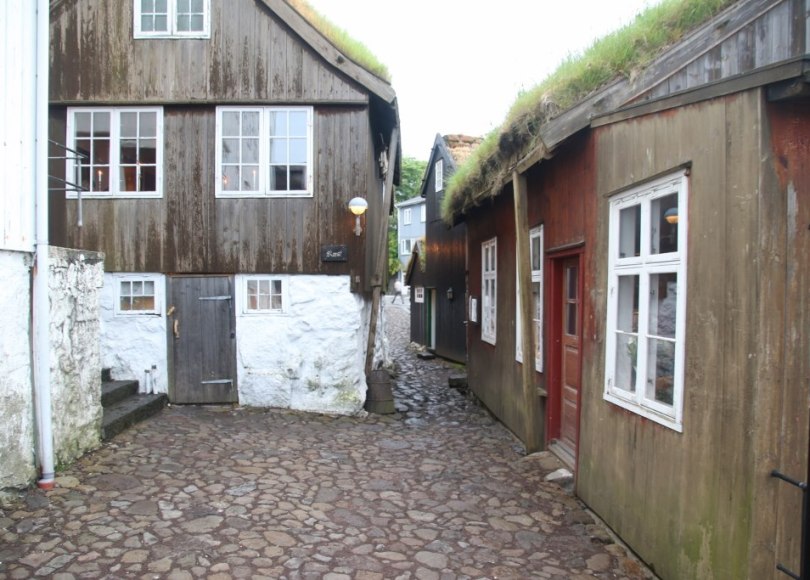 In Denmark and the Faroe Island the trend at the top restaurants in the last decade has been new Nordic cooking led by Noma in Copenhagen which was the first to create the new style of dinning and made the breakthrough to become known as the best restaurant in the world for a few years in a row. But up here in Thorshavn there is one restaurant at the top of the Thorshavn dining scene which has gone the other way. Restaurant Ræst has created its own unique style of old Nordic cooking.

The restaurant is located at one end of Gongin street where the street become really narrow and the old cobbles stone in the street looks like somebody has just thrown them down and then let them be whatever way they landed. In this section of the street are a group of old houses which has been turned into the top end of the Thorshavn dining scene. The house of the restaurant is a 500 year old wooden house with grass on the roof secluded from the traffic of the city.

The restaurant is specializing in old style Faroese dining which has a heavy element of fermented food in the cooking. The fermented taste of the food might be a bit of an acquired taste and the food in the restaurant definitely tasted nothing like anything we had tried before.

The menu is simple – there is only a five course menu for dinner and you can choose to have accompanying drinks. There is an alcoholic and a non-alcoholic beverage menu and the alcoholic is a mix between wine and beer – since beer apparently is a good accompaniment to fermented food.

The first dish is dried fish and pilot whale – called grind hval in Faroese. I am particularly interested in this dish since I have heard stories about the Faroese pilot whale. Traditionally the access to meat was extremely limited on the Faroe Island they only had a limited local production of lamb meat so the locals hunted the small pilot whales to supplement their meat and then they conserved it to last through the winter. I have heard a story from an old college who had been in the army with a Faroese recruit who apparently had grind meat send to Denmark from the Faroe Island when he missed his home – the food should be extremely smelly – but the Faroese recruit was happy to offer the meat to all his Danish friends who all politely decline the offer. Unfortunately the locals on the Faroe Islands has had to cut back on eating pilot whale in the later years since the meat has a very high concentration of heavy metals which makes it unsuitable for human consumption.

The second dish is another first for us. They serve fermented fish with lamb tallow – the fermentation is a traditional way of conserving food on the islands. There is limited access to salt – hence salted fish wasn’t an option and there are only a few trees on the islands – hence the smoking of fish was not an option either. The fermented fish has a very distinct taste which is made even more pronounced by the intense flavor of the lamb tallow. The dish is very flavor full and taste like nothing I have really tasted before. It was an interesting dish – but I don’t think I would look for a similar dish in the future.

Next up is fermented lamb which has been cooked into a stew with carrots and other root fruit. The fermented lamb has a very strong flavor and the stew has a distinct smell of lamb when it arrives hot at the table. The stew is quite nice and enjoyable if you like a strong lamb flavor in your food.

The main dish arrives – and here is a bit of a change to the menu – it is actually a fresh fish and the first dish which isn’t fermented or dried. It is a cod cheeks and onions – hence even here at the main dish the food served show how the people on these islands had to make the best use of all they could get their hands on. When you got a big fish like the cod you still had to use every bit of the fish. The cod taste great and is a good finish before the desert.

The desert is a serving and rhubarb served with some cracker. I think this desert isn’t really an old traditional dish from the Faroese islands but has some very modern influences – so it is breaking a bit with the theme of the restaurants as an ultra-traditional cooking style. The dessert is delicious and I am happy avoiding a traditional desert which I am somehow doubt would taste this good.

Just as we thought the meal was over they came with a last extra dessert – once again it was a pretty modern creation. A waffle but it came out hot and crunchy so it was a good little bite at the end of the meal.

All in all it was an interesting meal – but if you go you must have an open mind and be ready to try some flavors you have never tried before. If you are not up for this – you are better off going to one of the restaurants next to Ræst which serves great tasting and less challenging food.