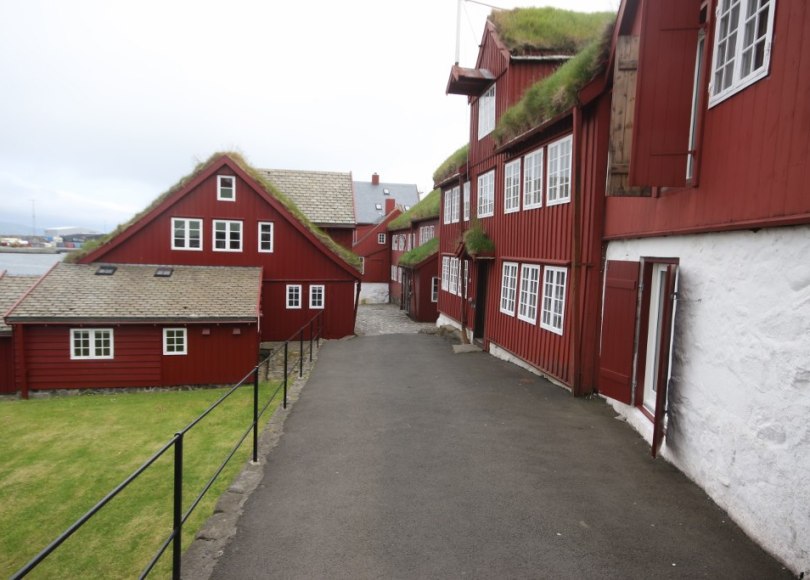 In the center of Thorshavn right down at the harbor is a small strip of land leading out to the harbor – in old Norse language such a piece of land is called a nes. When the islands were first inhabited this little area was chosen to be the meeting spot of the local ting. A ting is a traditional meeting place in Nordic countries for deciding the issues of the area – or kind of a parliament. Hence the little land here is called Tinganes – or the inlet where the parliament meets.

The area is pretty small so I guess it has become too small for the present day Lagting of the Faroe Islands where the home rule meets to decide the business of the islands. Hence the parliament is no longer located here – but the area down at the harbor is still a center of power on the island. The government has their offices here.

The government offices are surprisingly pretty from the outside. The government area has a single street going through the buildings which is an old cobbled street. And the houses on each side of the street all have a view of the harbor area. The houses are painted in a bright red colour and on the roof are the traditional grass growing – I guess this is the only government buildings in the world with grass growing on the roof.

The government district with the red and green colours are one of the most scenic districts in the capital of islands and it is well worth to spend a little time wondering around the area or just look at the buildings from across the harbor.