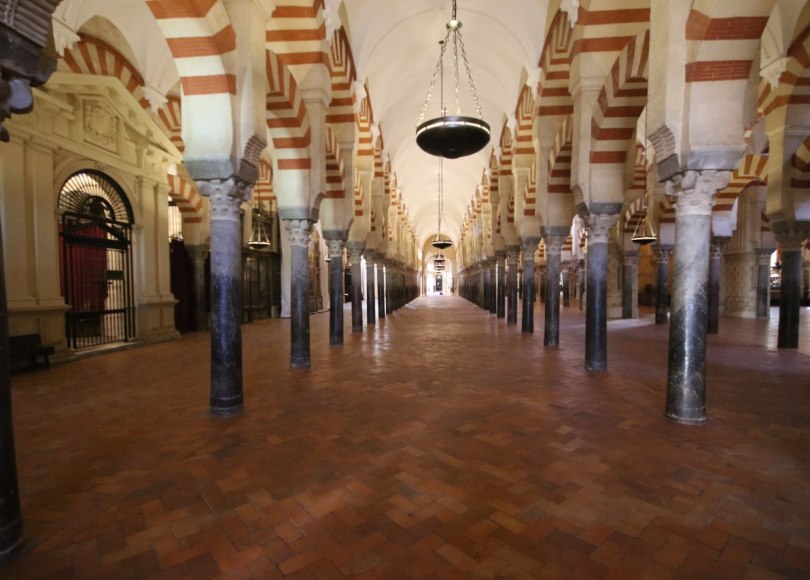 The city of Cordoba was the biggest city in the Muslim part of Spain and in such a great and wealthy city they had lots of resources to put into creating some magnificent buildings. The most impressive building built in the city during the Muslim rule is the giant mosque or Mesquita in the center of the old town.

When the Catholic king reconquered the city in 1236 they considered to tear down the mosque to make space for a new cathedral instead of a mosque. But when the new rulers got a closer look at the impressive building they changed their minds. The building was just too beautiful to destroyed it was possibly the most amazing building on the entire Iberian Peninsula at the time of the conquest of Cordoba. So instead of taking down the mosque the new rulers decided to transform it into a Christian building.

The mosque was saved and transformed – so we can visit it today. The mosque is easy to spot from the distance since there has been added a large tower to the wall around the courtyard in front of the mosque. Inside the courtyard is a big orange garden which you can wonder around without paying for the entrance ticket.

When you got your ticket you can go inside the old mosque. The first thing you will notice is hundreds of columns – 856 to be exact. When you walk around the mosque you see the columns everywhere.

A little walk inside the mosque you reach a spot with glass in the floor – down below you can see the remains of an old church built by the Visigoths before the Moors took over a bit later. The old church is tiny compared to the giant structure which has built on top of it today.

Along the sides of the mosque is a lot of small niches which has been transformed from their original purpose into many small Capella’s along the sides of the building. When you walk all the way down to the end of the building you get to the small niche which was the old mihrab from where the Iman were leading the prayer. Next to the mihrab are a couple of small chambers with the amazing treasures of the church which you can go inside and have a look at.

In the middle of the building is a giant capella – it is kind of a cathedral constructed inside the old mosque which would have been an attraction in itself if had been a standalone building somewhere in the city of Cordoba – here it is just another attractions of the building.

Today the building is used as a church only – there has actually been a request made by the local Muslim community of Cordoba to be able to use the building as a mosque again. This has so far been declined by the Vatican.