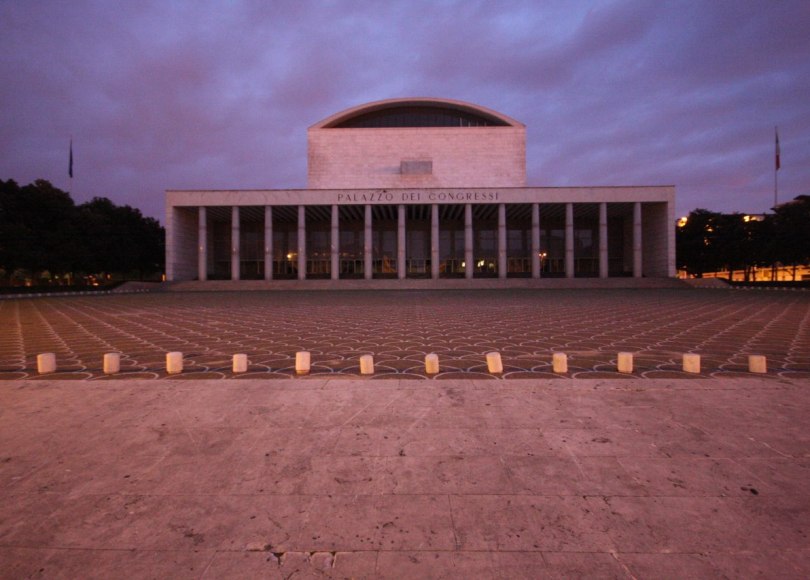 Rome was chosen to host the 1942 world fair. 1942 just happened to be the 20th anniversary of the fascist march to Rome so Mussolini wanted to impress the world. He found a venue a bit outside the old city of Rome for the world fair. And he decided to transform this area into a modern version of a Roman city updated with the newest building techniques.

A large group of the best Italian architects worked to create the best proposal for the new city – and finally in 1938 the main design of the project was ready – the new city would cover about 4 square kilometers outside the center of Rome and it would be renamed as EUR. The project was finally finished in 1939 – but the world fair was cancelled since World War II broke out in September 1939.

Mussolini didn’t finish his project and the work on the construction finally stopped in 1942. What was constructed was damaged during the war. After the war there were a lot of partly finished and damaged buildings – and the new Roman authorities decided to complete the semi-finished buildings and make a new business district outside the center of Rome. Hence EUR was a decades ahead of other European cities where such out of center business district didn’t appear until the 1980s in La Defense in Paris and the Docklands in London.

The area is an interesting place to go out and visit during your stay in Rome if you are done looking at all the amazing sights in the center of Rome. The buildings out here are quite different and they have some of the fascist bombastic grandeur in the design. It isn’t quite a new Roman Rome – but the buildings are on a very grand scale.