You would probably expect to see your first Egyptian temple in Egypt. But I actually saw my first Egyptian temple in Madrid a year before I went to Egypt. I was just staying in town on a long layover on a flight to Guatemala. So I hadn’t read anything about Madrid before arriving. I just picked up a tourist map at the hotel and then went out exploring. I saw there was a sight close to the royal palace called the Templo Debod. I had no idea what it was – but it was marked on the map so I just walked the short distance from the royal palace to the temple.

Much to my surprise the temple wasn’t an old temple of Carthaginian or Roman origin. No it was a full scale Egyptian temple. I wondered why it was here. Back in the 60s when the Egyptians decided to build the Aswan Dam which created the giant Lake Nasser they had to relocate the giant temple of Abu Simbel in addition to several other temples. This was a huge undertaking – having to cut down the temples into separate blocks of rock and rebuild them at a different location. The Egyptian government had help from the Spanish government in this undertaking. I figure the Egyptians were considering how they could say thank you to the Spanish for their help – and they asked themselves the question what does Spain miss? And the obvious answer was a full-scale Egyptian temple. So they donated the Templo Debod to Spain since it would be flooded by Lake Nasser anyways. 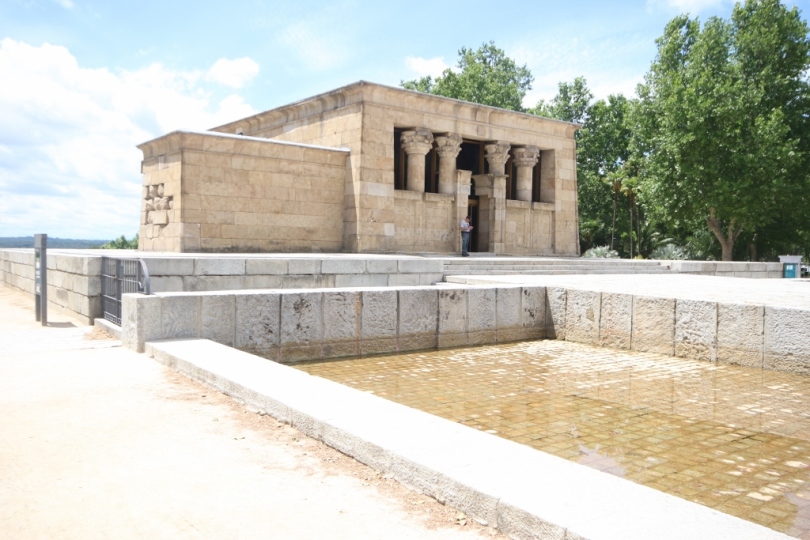 When I went back to Madrid I remembered this temple and decide to look for it once again. So I walked from the royal palace to the park next to the palace where the temple is located. It was still there. And it looks fairly impressive though it was a bit smaller than I remembered it like – maybe it just seems small after I have seen the actual giant Abu Simbel temple in Egypt.

It is free to walk around the park and have a look at the temple. You used to be able to go inside the temple and see the inside. For some reason it was closed during my visit. There didn’t seem to be any work going on maintaining the temple. There were still a sign stating you could only be thirty people inside the temple at any given time – so hopefully the temple will reopen at a later date. Even if the temple isn’t going to open again it is still worth to walk the little detour from the royal palace to have a look at the temple from the outside – especially if you haven’t made it to Egypt yet.