All around the world you can find triumphant arches – in Rome alone you can find several. But one arch is considered the model of all later triumphant arches in the world – the Arch of Constantine the Great. His arch is located just outside the Colosseum in Rome right next to the Roman Forum in the shade of the Palatine Hill. It was used as the finishing line in the marathon during the Olympics in Rome. 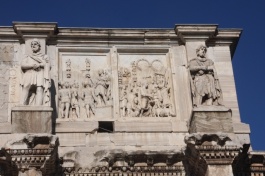 Just the location of the arch makes it stand out a bit more than the arches at the Roman Forum. In principle this location is less prestigious than a location at the forum itself – but it provide the arch with a bit more of space around it which gives it more attention than it would have gotten if lots of other ruins would surround it.

The arch is located out in the open – and you really can’t avoid seeing it if you go and visit the Colosseum – so why not walk up to it and have a closer look at the detailed artwork which covers the arch.