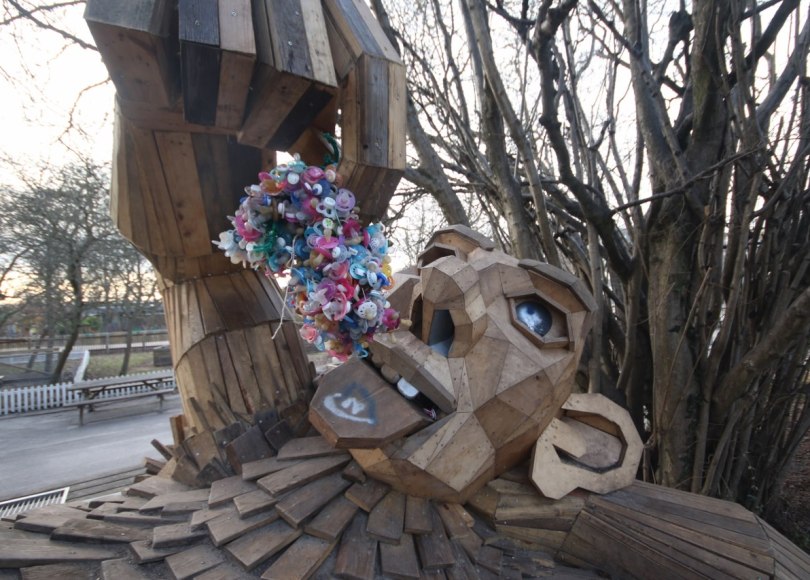 Thomas Dambo is a local artist of Denmark and he has made some large trolls around Copenhagen. During 2020 he was doing a project in Puerto Rico but had to return back to Denmark when the world shut down. To pass the time he has started a series of new projects making more trolls in Copenhagen.

I just realized one of these trolls was actually in walking distance from my home – but I had never been there to see it before. Since it was just a short bike ride away there really was no excuse not to go and see this local troll. Sanka lives on a playground of a social housing area and there is a few of the locals coming to visit him on a regular basis.

Sut is the Danish word for pacifier and it seems like the local kids do come to Sanka and donate their old pacifiers to the cute troll. Next to Sanka is a large collection of pacifiers which I suppose the kids has given to the troll during the last few months after the troll was created.

Next to the troll is a plague with the story of Sanka which goes like follows:

Sanka was the happiest troll in the world. Since he was living right at the middle of a playground and every day he is surrounded by many hundreds of kids who feed him with pacifiers. There were large pacifiers, small pacifiers, blue pacifiers, grey pacifiers, children pacifiers, bear pacifiers, eagle pacifiers, teddy bear and orange pacifiers and all other sorts of pacifiers.

Sanka loved pacifiers – Yes actually they were his favorite meal, and if it was up to him he would lie at the middle of the playground and eat the pacifiers all day long. He would never have to go anywhere else – he could just lie he while his stomach would grow bigger and bigger.

There was only one problem. Sanka hated the sounds the small human kids made when he ate their pacifiers. Their screaming hurt his ears, when they cried and yelled. The sounds made him crazy.

Oh giant pacifier troll – you who is ever so hungry.

Never more shall you hear me cry and wine.

Before I was a little turd – but now I have grown up.

The pacifier is now over and out, and I can handle myself.

Giant pacifier troll I give to you here my pacifier. Eat you round and happy and full – my baby life is over.