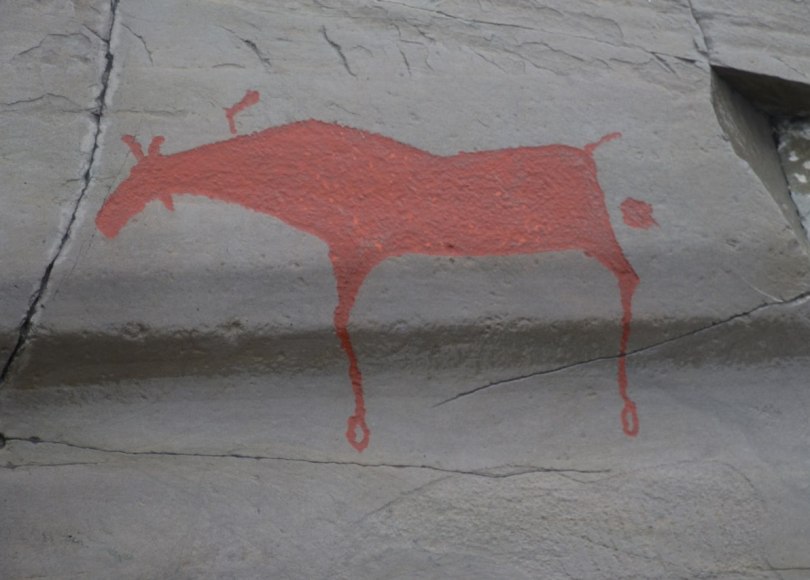 You can find rock carvings from ancient times several places around Scandinavia – but the biggest collection of rock carvings is found just outside the small town of Alta in northern Norway. There are a total of around 6,000 different carvings which has been made from about 5,000 BC to 500 BC. The carvings display several hunting scenes of the different animals of the north.

You find the painting just behind the museum of Alta and you are supposed to buy a ticket at the museum which also covers the land outside the museum. We did go to the museum so we had a valid ticket – but if we didn’t have a ticket we could just have walked in from the street since there was nobody checking the tickets and I doubt there was anybody doing control in the evening when we visited after the museum closed at 6.

There are several sections of carvings and you can get a little booklet which tells you a bit about the different carvings at the sight. You have to walk a bit around the small trails which takes you from section to section of the rock carvings.

Some of the carvings has been paint which makes them easy to see while other sections has been left without paint and some of them is very hard to spot so you probably shouldn’t expect to see every carving at the place. No matter if see them all there are a lot of different carvings of reindeer and moose so there are something to see for everybody.

The location of the carvings is actually pretty right at the water with the purple flowers in bloom in the summer it is a good place to enjoy for the little walk in the area as well.