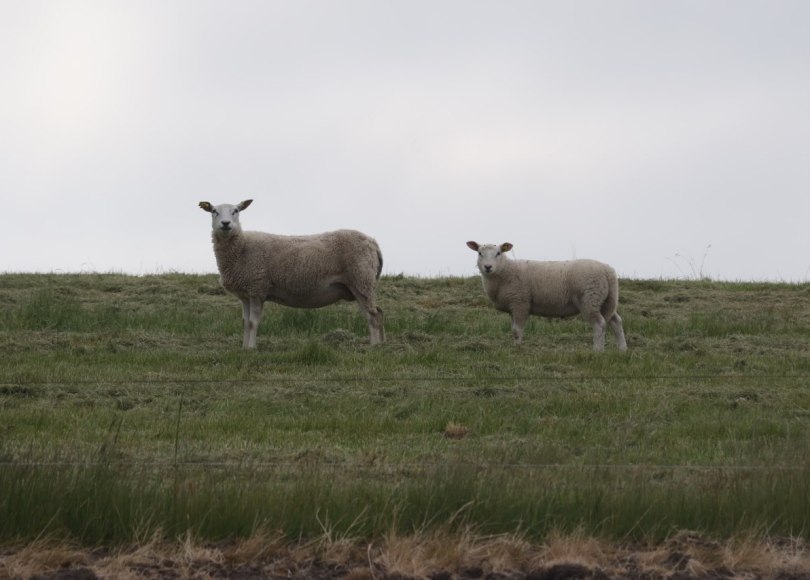 We are staying in a little holiday house a bit north of the biggest lock in South West Jutland Videå Slusen. The landscape is extremely flat and the only two things which stands out in this flat landscape is the dike which is on my left hand when walking south to the lock – which is the second thing standing out at the top for the dike in the distance. There is a sign on the trail which claims there is 1,2 kilometers to the next point which obviously must be the lock.

When the landscape is this flat it is hard to judge the distance – and it doesn’t look like there is very far to the lock so I just start walking there in the morning. It seems like a good idea to go down there and have a look at the birds in the area.

After a bit of a walk the lock seems to have almost the same distance away – there are a few birds out at the water but I can’t actually see the water that often because there is a bit of growth along the shore. I try walking out there a couple of time but when I start to get close to the water the tidal sea make it shown. The land is extremely muddy and when I get close to the water the mud is getting deeper – I guess it is possible to walk a bit out in the sea but I give up since the mud will just make the boots too wet and dirty.

I continue the walk towards the lock and after a bit it is becoming a matter of principle to walk all the way. There are a few birds around to give a bit of entertainment and the sheep’s on the dike are there as well but there is no humans anywhere to be seen on this morning walk.

Finally I make it to the lock – it took just over half an hour of walking and stopping a bit to look at the birds – it turned out there was about 3 kilometers to walk despite the lock seemed so close when I set out.

Out at the lock the landscape is a bit more open without vegetation so it is easier to see the birds on the tidal flats which take advantage of the low tide to search for their breakfast. Unfortunately the birds are a bit far away and they are not really positioning themselves very well against the sun so the pictures of the birds are slightly dark.

Going back it is another long walk along the new modern dike. After a bit of a hike there is a little trail inland – it is actually this little side trail from where there is 1,2 kilometers back to where I started and almost 2 kilometers to the lock. I guess it is time to take a different trail back and go a little bit inland unto I reach another dike. This dike used to be the main dike until 1981 when they finished the new and stronger dike further out. The old dike is clearly not as strong as the old dike but they have never taken it down and just left it behind the new dike. The trail follows this old dike back to where we stay which is actually at the meeting point of the two dikes.

The walk here inland is not all that interesting there is less birds here and the only thing to break the monotony of the grassy landscape is the sheep’s trying to eat as much grass as they can. Finally I get back from the pre-breakfast stroll which was supposed to be quick but ended up a bit over an hour including the watching for birds.