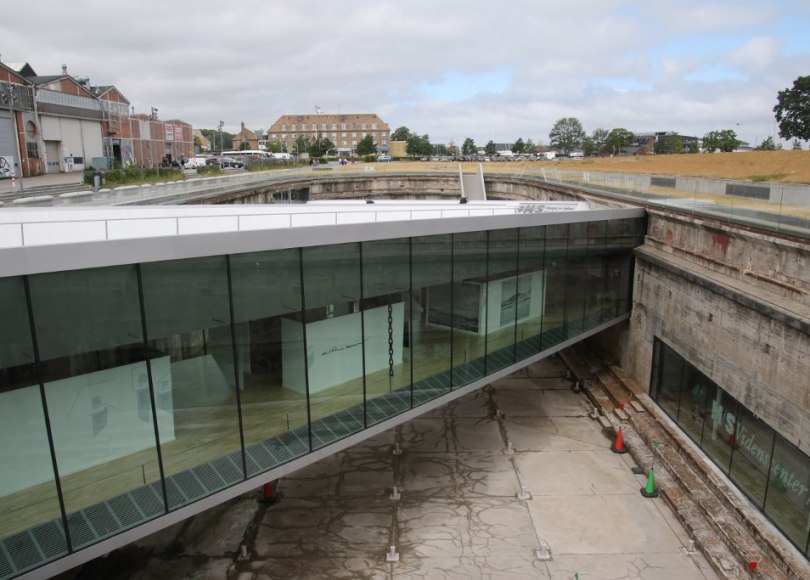 The Danish Maritime Museum used to be located inside the walls of Kronborg Castle – but when Kronborg was adopted on the UNESCO world heritage list it was a requirement the museum should relocate. So they started searching for a new location to house the museum. They wanted to keep it in Helsingør which has a long history as an important maritime town of Denmark and there also used to be one of the biggest shipyards in Denmark in the city.

The old shipyard had long disappeared but the old dry dock had been left behind. And it was decided to use the old dry dock to house the museum. One complication was that part of the requirement for the UNESCO statues of Kronborg was the appearance of the area outside the castle had to be unchanged. So they were not allowed to build above the top of the dry dock and the museum had to be located inside the old dock. Fortunately the ships they built at the museum were quite big so there was plenty of space inside the dock.

To make the museum they called for a competition among architects – and in the end the competition was won by Bjarke Ingels and the BIG architect firm. Their solution to the design of the museum was quite ingenious. They didn’t actually build the museum inside the dry dock – instead they dug out the museum in the area next to the dock creating an underground museum with a view to the old dry dock. Inside the dock there are a couple of bridges across from one side to the other side of the dock. The bridges have large glass walls so you can look out at the old dock to see it from inside.

There is information of the colonial era and also information about what happened during the Second World War. And another section of the museum is dedicated to different models of ships.

The museum is a decent maritime museum so if you have made it up to Kronborg you might as well go and have a look if you got any interested in maritime history. Even if you don’t visit the museum make sure you go by the dry dock before or after a visit to Kronborg because the design of the museum is interesting in itself.

If you go on a daytrip to Kronborg and visit the Maritime Museum you might consider buying a Copenhagen Card which gives you free entrance and transport. If you also plan to go to Roskilde the day before or after to visit the famous church and royal graves and the Viking Ship museum the Copenhagen Card should be good value for you.