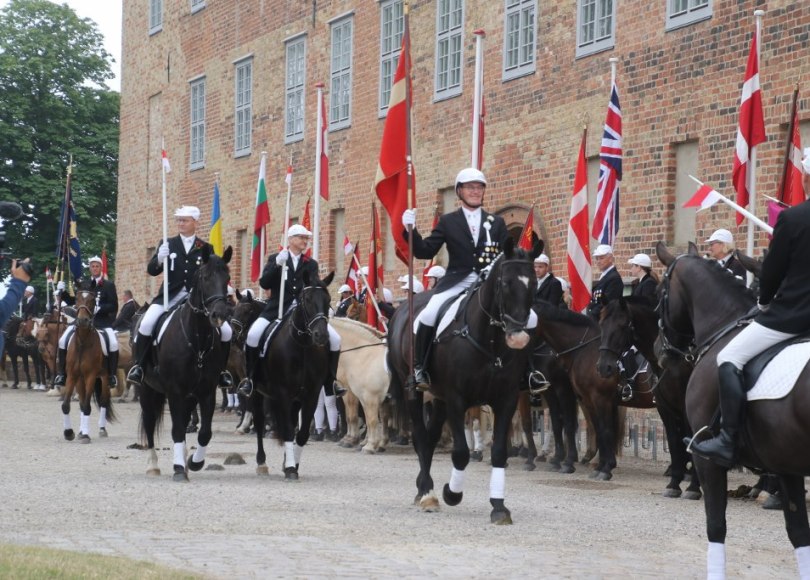 The biggest annual festival in Sønderborg is the ringridder festival. One of the highlights of the festival is when the ridders in the festival ride through the city on their horses followed by several marching bands. The festival is held during a weekend in early July and the horse parade start at 11 on the Sunday. So we have to get an fairly early breakfast before we head to the castle ground to see the start of the parade.

A bit before 11 all the horses has arrived and the hundreds of riders are getting ready for the grand departure for the ride through the city. Just after 11 the parade takes off. In front of the parade are six riders dressed in what look like old knights uniforms they ride in front blowing their trumpets.

Just after the front riders leave the other horse riders start taking off in small groups. They ride slowly through the city and when a few riders have left they are followed by a marching band. There are no less than seven marching bands. Some of the bands are from the local area but there are also some bands from other parts of the country and some seems to be from the British Isles.

The parade goes on for quite a while. After about 20 minutes the last of the adult riders has left the square and some kids riding on ponies finish off the horse parade.

A lot of horses riding through the city will unavoidable result in the horses making a mess of the streets of the city. so when the last horse has left the square in front of the castle a cleaning truck leave to wash the streets after the horses.