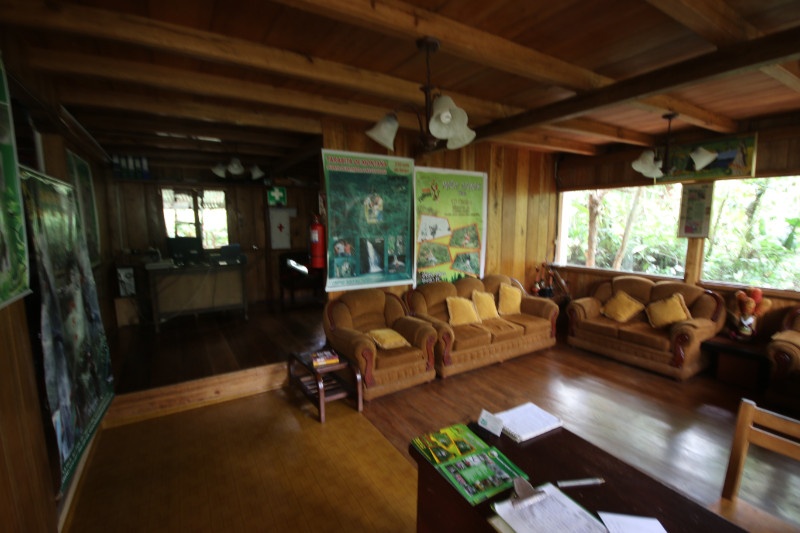 We arrive to the center of Mindo and find our hotel is fairly close to the bus station or whatever you can call the small bus stop along the road in Mindo. The hotel is right next to the village football stadium and what is probably the biggest night club in town – the last fact greatly helped by the fact it very well might be the only night club in town. The night club didn’t bother our sleep at night since it seemed to be closed during our stay which didn’t coincide with a weekend.

The rooms are actually all small bungalows which all have a little porch and a hammock outside the room. The room has a decent little bathroom in the back and it do have both hot and cold water which you can appreciate after you have been out doing some sort of activities during the day or the morning. The room got a double bed and a bunk bed next to it so it can be used as a family room as well. I don’t think the rooms are sold as dorms – though it seemed like you could use the rooms as dorms if the owners would like to do so. There is a bit surprisingly well working Wi-Fi in the bungalows if you need to update yourself about what is going on around the world during your stay in a very quiet village.

The room comes with a breakfast which is served outdoor under a balcony. The breakfast area is actually one of the best things about the hotel. since in front of the breakfast area are three hummingbird feeders which attracts a lot of birds – which I personally spend a long time watching – hence there was only limited time to explore the rest of the area around Mindo. In addition to a lot of high speed hummingbirds flying around the garden there were many other birds. Including a nice tucan which showed up just a few minutes after we arrived at the hotel. The owner of the hotel also gives the birds a lot of bananas which attracts other birds from the area – hence you can see a lot of the bird life of Mindo just by sitting outside of your hotel room and watch what it coming to eat bananas. If you like the hotel can help you organize a more formalized bird watching tour around the area to see a lot of the amazing bird life of the Mindo region.

The garden of the hotel is a wonderful semi wilderness which looks more like a jungle than a hotel garden. It isn’t just your average hotel garden – it is indeed an orchid garden which is listed in guidebooks as one of the attraction of Mindo village. Hence we took advantage of this wondering around the garden and looking at the many orchids. The English speaking receptionist will give you a tour of the garden which is a good idea since it is a bit difficult to find some of the flowers without help – since they can be a bit small and there are many flowers to look for. The big collections comes due to the fact the owner of the hotel has spent years collecting orchids from all over the area and now they have hundreds of different orchids in the garden.