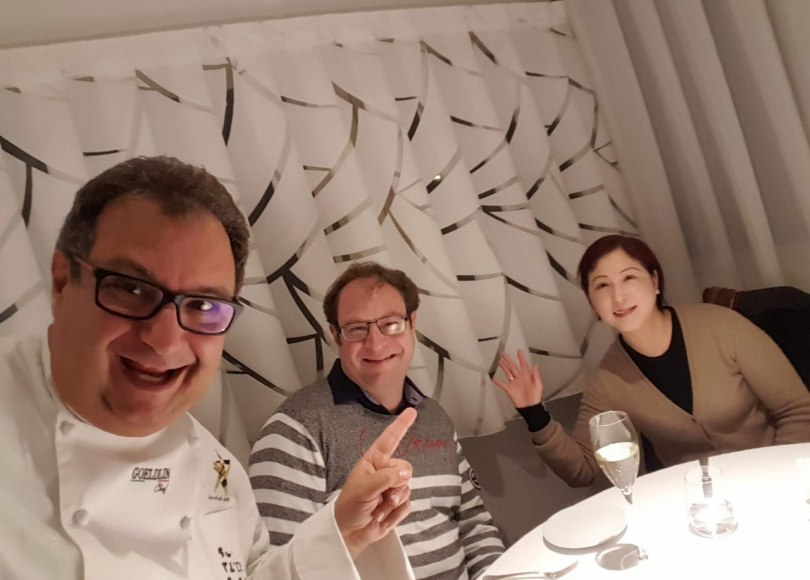 On our Italian whirl trip a couple weeks ago, we arrived in Pompeii after a long drive through heavy snowy fall in the mountain, and I thought we would stuck somewhere as we only drive so slowly, and we could not see the road in front of us.

Finally, we are in the city center and we so look forward to dinner and New Year celebration of 2019.  The traffic was madness… every car was out to celebrate the New Year and we actually stuck in the roundabout for a while.   Pompeii was once a thriving, rich Roman city, near Mount Vesuvius. Now it is famous for one of the best-preserved archaeological sites in the world, so many people come to visit and celebrate New Year here.

Once we arrived in our B&B, we have shower and then head out to the Restaurant which has been reserved for our dinner.  We arrived on time at 8pm as mention in the booking.

When we dine at other Michelin restaurants around the world, we always come on time and the restaurants expected us too. However, it is not the case in Italy.   There were one couple already seated before us and the rest of the guests was very late.

The staff was very polite and formal.  After we were seated, given drinks and one snack, we waited until other guests arrived which actually takes a while. I was not sure how long we waited, maybe an hour until the table fill in.  By that time, I was hungry since we did not get any bread and I was about to ask about it when the staff come back with one little snack which does not taste much and then more waiting. While we waited, the head Chef come and talked to us, unfortunately he does not speak much English but he was very friendly.

Oh boy…  I was starving……. Finally, the bread arrived – which much appreciated.  It was 5 different types of bread and taste was good.

After that we get our first dish of raw salmon with cream which was delicious. It was fresh, tender and tasty.

The tuna sashimi arrived next with cream top with fruits.  This dish also great and we really enjoyed ourselves.

Third dish more fish served – it was fried cod with some sauce, but I do not remember what it was.  I start to realized that we will have a lot of fish tonight and apparently it is an Italian style for celebrating a New Year.

After that we waited for a while before the food arrived. It seems the food do not arrive on the table in timely manner as some are too fast and other too slow.  We notice they served the late arriving guests so they can catch up with ours, which was not that pleasant since we just seated with nothing to do and watch the couple eat their 3 dishes simultaneously to catch up to our next dish.

After waiting until the couple finished with their third dishes, we get the risotto.  The taste was wonderful and really delicious. However, I find the risotto was under cooked.  I am not expect on this, but I have had my share at eating risotto.  This was really hard to bite, and I know it was under cooked.  Shamed really .. as the taste was delicious.

Next we get pasta with lobster sauce and this is also wonderful food. I finished this dish and love it.

Unfortunately the fried cod dish was over cooked and the meat was a bit hard to bite.  However it presented beautifully and feast to the eyes.

Finally, the triple chocolate dessert was heavenly.  It was purely indulgent and really addicted. Love it.

When the clock ticking at 12pm at midnight, strangely the chef given us a plate with pork with green beans to eat.  I was very surprise and it taste very strange after we eat our dessert. I only assumed this is an Italian style and wish good luck for the New Year.

All in all… it was delicious.  However for the Michelin Restaurant I would expect more in term of the service and timely food coming to the table and not let the guests waiting hungry  and watched other guest eat so they can catch up with our next dish.