We arrive at Palmarium reserve in the afternoon and right as we get ashore we spot some lemurs. The reserve has collected a lot of different species of lemurs from around Madagascar at their location. So it isn’t a reserve like a national park more like a zoo which wasn’t really clear for us before arriving. 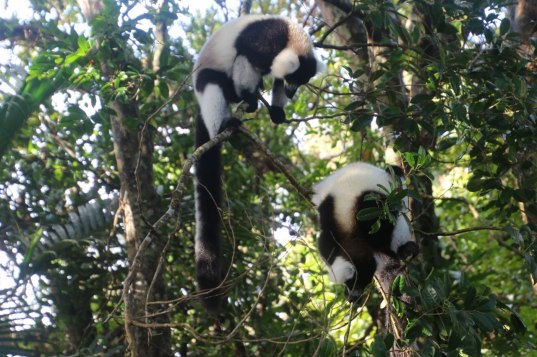 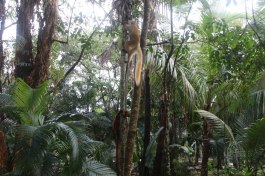 The place is the most expensive we have stayed anywhere in Madagascar so naturally you would expect some luxuries. And yes they do have electricity – for a limited number of hours a day. They do have hot water – when they do remember to pump the water from underground. And the rain makes sure the humidity in the rooms is around a hundred percent at all time so when your clothes get wet from the rain it will not dry for days. All in all it was somewhat overpriced resort.

The good thing is at least you do get a discount if you want to go out for a night trip looking for the illusive aye-aye lemurs. They are in fact difficult to spot on the island and this place is one of the easiest to spot them. The aye-aye is the largest of all the nocturnal lemurs and it is by far the strangest looking of all the lemurs. It got an elongated middle finger and their furs make it look like out of this world.

We got two nights at the resort so we can choose to go for the aye-aye either the first night or the second night. The rain is pretty heavy during the afternoon so it looked like it might be better postponing the trip to the next day. But a little before the departure time – just after dark – the rain stops. After a few days in eastern Madagascar it has become clear that you should take advantages of the short breaks in the rain so tonight is the night to go and spot the aye-aye.

The aye-aye is located at their own little island where they have caught nearby and put on this small island to keep them captive since lemurs do not like water and will not cross even a short water stream to get away from a small island.

It is only a short boat ride to the island and then we walk a little bit to a place where they have placed a coconut to attract the aye-aye. But there is no aye-aye in sight when we get there and to make them comfortable coming we have to turn off all our torches and stand around in pitch darkness for quite a long time only the guide has a little light which he will use to help us spot the aye-aye when it arrives.

Finally after a long wait an aye-aye arrives. It attacks the coconut with the teeth and the elongated middle finger and looks crazy with the fur on the head. It keeps going on the coconut for quite a while until it finally manages to get a piece of coconut broken away. And then it runs up the trees and disappears in darkness. It takes a little while and then it comes back to crab another bite. By now it has made a hole in the coconut so it doesn’t have to work quite as hard as the first time around but it still takes a while before it gets another piece.

We wait a bit long to see if the male aye-aye should return. It doesn’t instead a female arrives and attacks the coconut for a while. People are still taking pictures and making video put the clicks of the cameras has become less frequent by the time we have gotten to the third sighting of the aye-aye. And when the aye-aye manages to break free yet another part of the coconut we leave the spot behind and walk back towards the boat. I am at the back of the group and suddenly the people in front of me stops. It turns out we are walking pass another coconut stand on the way to the boat – and this coconut has also attracted a female aye-aye. So we prolong our visit to the little island while we are watching the bonus aye-aye.

The last aye-aye is really working hard on the coconut and hangs around for a long time and we watch it for quite a while. And then finally it is time to head for the Palamarium where dinner is waiting a bit behind schedule since the visit to the small aye-aye island has been longer than expected.