Geranium has been one of the top restaurants in Copenhagen for a while – it might have been a little in the shadows of Noma for several years – but when Noma closed down their restaurant at its original location to move to a new spot. There was no longer any doubt about which restaurant was the undisputed best restaurant in Copenhagen – it is Geranium which is on top with the highest spot on the world best restaurant list and with the maximum 3 stars in the Michelin guide. The head chef is the only Danish chef who has won the Bocouse D’or which is sort of the unofficial world championship of chefs. In addition to his win he had previously gotten a second and third place in the competition.

Needless to say with that kind of fame and general recognition of the restaurant I went there with very high expectations of the food we were about to eat for the night. 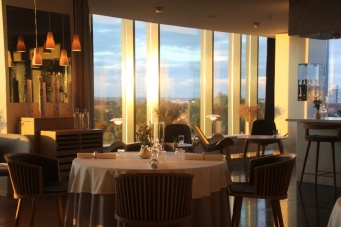 The view of the restaurant 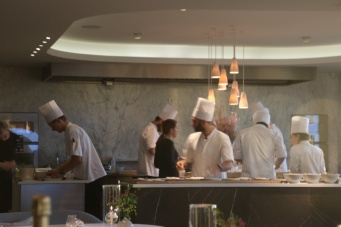 The restaurant is located at the highest floor of corner tower at the Danish national stadium where the Danish national football team plays all its important home matches and the Copenhagen football club plays it matches at the stadium as well. Fortunately there was no matched scheduled for the night when we were dinning here so there area around the stadium was quite. When we arrived on bike – like you do in Copenhagen – we were met by other people going to the restaurant arriving in a Rolls Royce.  We went in to the entrance to the tower and trying to catch the lift up – which didn’t really work since you needed an access card to go up to the 8 floor. Hence there was a pretty large crowd waiting for the lift. Finally the lifts started working and people were shuttled up to the restaurant.

We got into the restaurant which had large windows not facing the soccer field below but had a great view to Fælledparken which is the largest park in Copenhagen municipality. We could see the rooftops of the area around the restaurant and enjoy the sun setting during the dinner. 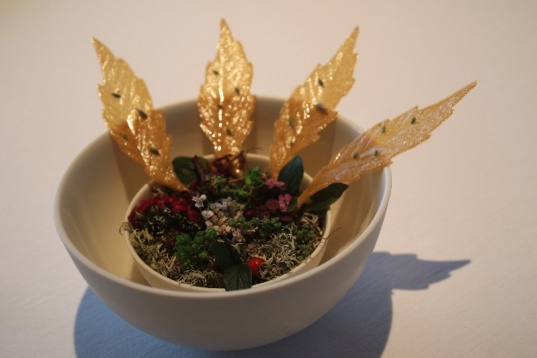 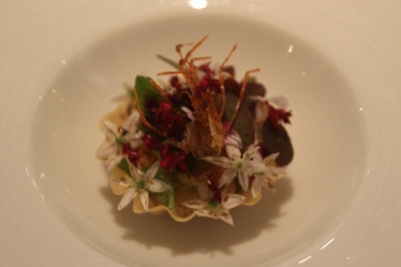 The menu was simple. The restaurant only offers one fixed menu with six snacks and nine dishes and some sweets to finish off the meal. It is the same menu offered for dinner and lunch.

The meal started with some delicious snacks which came to the table at a good pace and were all well-presented and quite delicious and nice to enjoy before starting the actual meal. 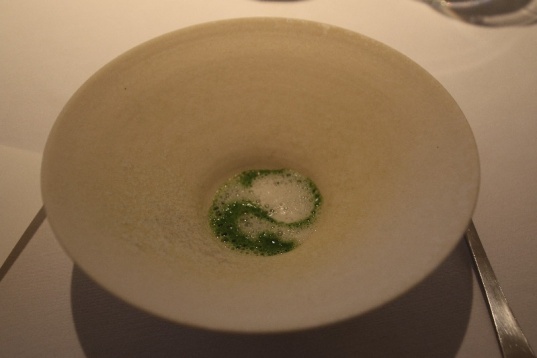 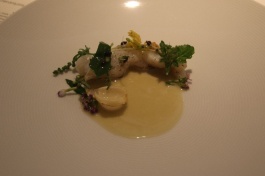 After the starting the snacks the meal started arriving. We started out with a small first dish based on broccoli and dried trout. It was a good little starter to kick off the meal. 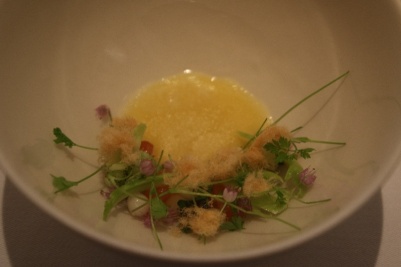 Next up was one of the signature dishes. It was salted hake which came on a plated with the colour as the hake. When the hake arrived at first I wasn’t sure they had actually placed food on the plate but after a closer look it became apparent there was a thin slice of hake on the plate. The waiter poured on a sauce of parsley and caviar and put some salted fish scales on top at which point it was clear there was a meal on the dish – and easy to see on the picture. I could probably have gone without the fish scales they did add some saltiness to the dish but the texture and the way they crunched in my mouth wasn’t my favorite aspect. 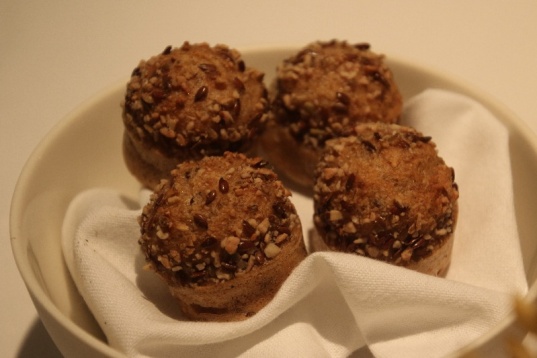 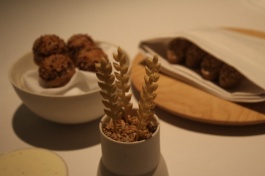 The hake was followed by some bread to go along with the meal – the restaurant actually had put the bread on the menu as a tenths dish which I think wasn’t quite in order. Though they did come with a special bread formed like a grain growing on the fields and it was very pretty though more like a tiny snack than actual bread. I must say this tiny bread was well baked and very crispy so I did enjoy the little crispy bread.

Next was a lemon sole which was a fairly small serving of well tasting fish. It was very enjoyable little fish dish. 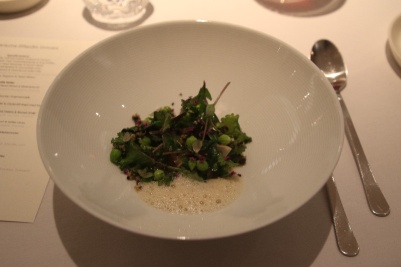 As a last fish dish we got a tiny snack of a tartlet of fjord scrimp – it might have been the weakest dish of the night and I probably could have skipped this small snack like dish.

Finally we got to the main meal a chicken dish with cabbage and cocked with hay beer from Herslev Brøkhus which is one of the best microbreweries in Denmark. 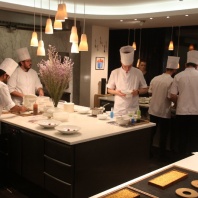 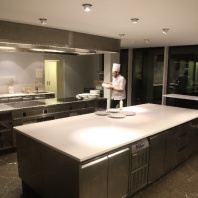 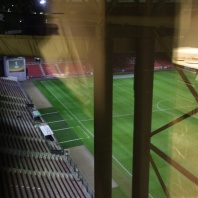 After the tour we finished the meal with three small desserts. Which were good but maybe not the best desserts I have had at top restaurants. I guess the dessert is often the part of the meal where the top restaurants have their weakest spot. After the desserts we got a selection of snacks and coffee which apparently was included in the price – not that it would have made much of a difference of the total size of the bill. 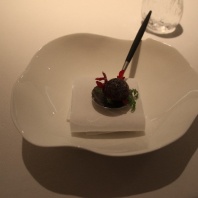 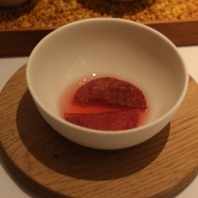 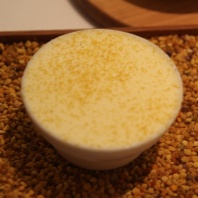 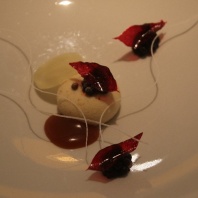 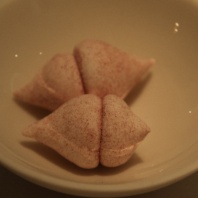 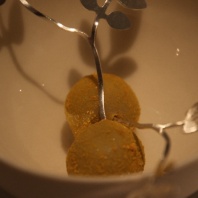 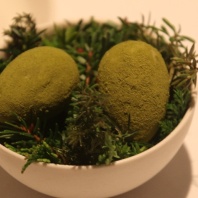 We left the restaurant and got down with the elevator which worked ok. When we walked out the restaurant we noticed Mary’s car was parked clearly illegally right in front of the door with the chauffeur standing next to it in his white uniform. I figure the policy tend not to hand out parking tickets when your number plate is royal crown 415 indicating you are the crown princess of Denmark. 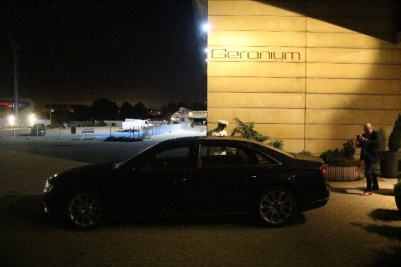 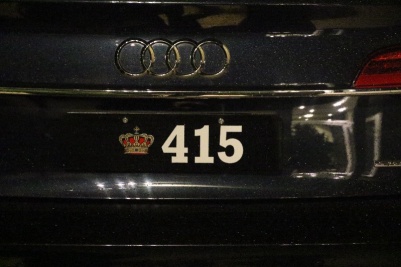 Lunch at the hotel close to the airport since our holiday is almost over. Have to catch a 7 am flight back to Copenhagen, so have to wake up at 4am tomorrow since we have to return the rental car.
Yunni was lazy to walk to the center to find a tapas restaurant and decided to eat at the hotel restaurant.
Having lunch at this tiny town up in the mountains.
Salamanca is a very beautiful city. Both of us love the place. There are so many pretty old buildings with carving, arches, old roman Bridge, library, hotels, churches Square,etc.
Trying the food at the casino. We see the place was really packed, which is a good sign. We really like the cool mussels, it was delicious.
Currently having lunch here. This place located next to the motorway toward Madrid. We decided to stop after 2 hours drive.