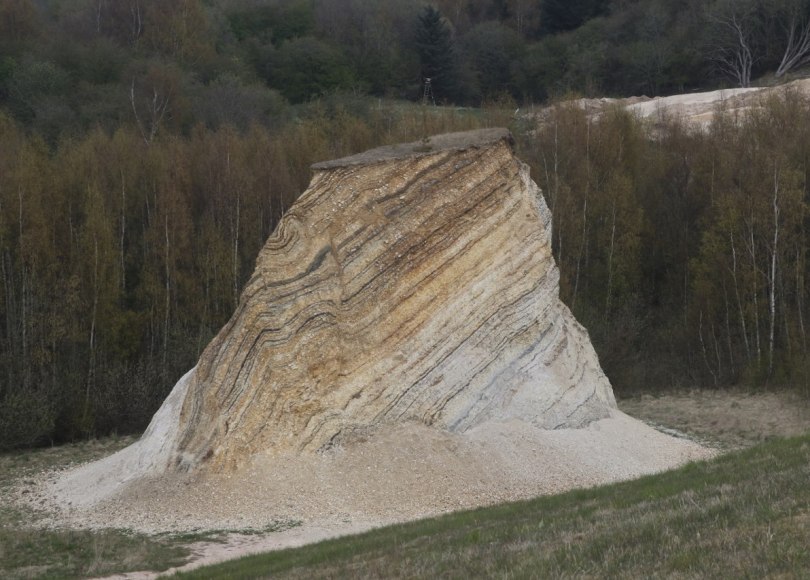 Back in the first half of the 20th century there was only a few possible business people could join. The traditional lines of work would be fishing or farming – but the modernization of these industries meant there wasn’t enough work within the traditional business. Instead the male population could find work in the new industry – the digging of a special sort of clay called moler in Danish.

To commemorate these hard working men who helped shape the landscape of Fur a statue of one of the men has been erected on the island. Fittingly the statue has been placed next to the largest mining site where they still dig for the moler.

You can find the statue right next to a parking lot not far from one of the ancient burial hills on the island. It is on a small road leading up to the parking lot at the north beach of Fur.

Dinner tonight at local restaurant which served traditional polish food. We have pork cheek and pork knuckle with additional salad. The staff speak limited Inggris but friendly.Taste delicious. Cost €24 including drinks
Exploring the small town and see the small castle and lunch break of dumplings
Surprisingly this small town has plenty of sights from the ruins of castle, original Old buildings in the old town, delicious food at many restaurants and cafe. famous astronomy and relaxing sailing on its river. Most day we ate 3x in the afternoon just tk sample its cuisine 😊 love the food and it is so cheap.
Pork cutlet and fried chicken breast in breaded for dinner, served with boil Potatoes and salad. The meat was tasty and delicious. Good value for €14.50 included half liter beer and handmade lemonade.
Still enjoying dumplings for lunch. It had so many different flavours and we try it all
Almost a metre long pork cutlet with 2 different salad for dinner tonight. Surprisingly the meat was soo tender and yummy. Delicious, and Mickey eat it all...almost 😋