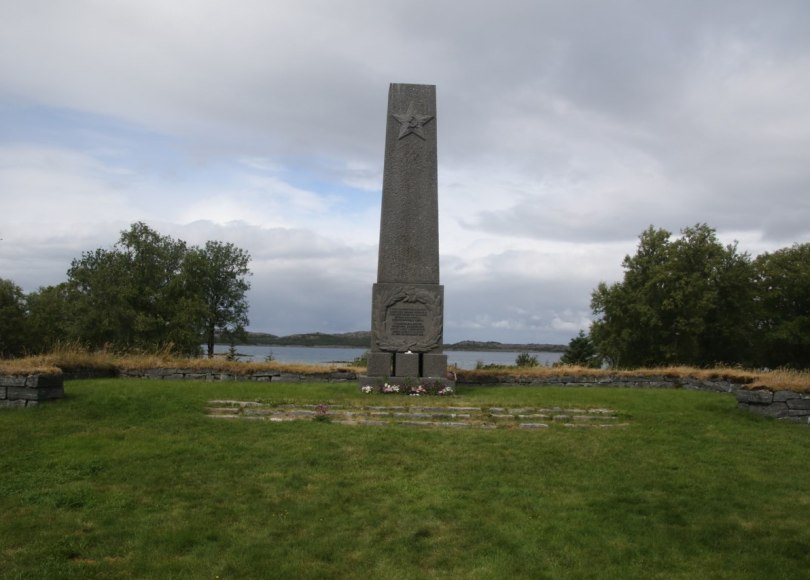 I never thought Norway would have any major war cemeteries since there really haven’t been any major battles in Norway for centuries. But during the Second World War 100,000 Soviet prisoners of wars were sent to Norway to work as forced labor for the Germans. They primarily worked around northern Norway helping to build a railroad and other major infrastructure which should help the Germans to transport men and equipment closer to the frontline against the Soviet Union which ran along the Norwegian and finish border with the Soviet Union.

During the war 13,000 of the Soviet prisoners of war died due to hard work and pure condition in their prison camps. Most of these prisoners were buried close to the prison camps where they worked. After the war it was decided to move many of these dead to a common cemetery just outside the small settlement of Tjøtta. In 1951 a total 8,000 of the dead prisoners were reburied in the ground here outside Tjøtta.

Originally not much was known about the people who had been transferred to the cemetery in Tjøtta – but a research projected was started in 2009 to identify as many of the buried prisoners as possible. In 2015 they put up memorial plagues with all the names of the identified prisoners who had been buried at the cemetery of Tjøtta.

In addition to the many prisoners of war who died other places a lot of people died close to this location. On 27th of November 1944 the ship Rigel were transporting Norwegian and Soviet prisoners along the Norwegian shore. The ship were attacked and sunk and 2,456 people died including the German crew of the ship. At first these people were left at the wreck but were later transferred to the cemetery.

The cemetery may be a sad place of remembrance. But the location of this cemetery is pretty good – with a view of the sea. You arrive at the cemetery just after you drive out of ferry at Tjøtta and it is right next to the only road of the area. So if you drive Kystvegen scenic road this is an interesting little stop along your route.